Whincup on Bathurst provisional pole with a 2:04.1

Whincup on Bathurst provisional pole with a 2:04.1 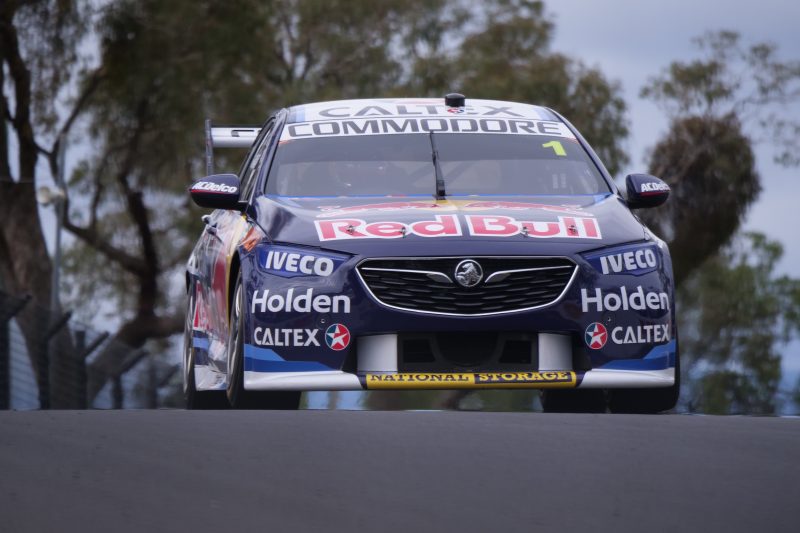 Jamie Whincup will be last out for tomorrow afternoon’s Armor All Top 10 Shootout after recording a 2:04.1s in qualifying for the Supercheap Auto Bathurst 1000.

While the big names of Whincup, David Reynolds, Scott McLaughlin, and Shane van Gisbergen filled first through fourth respectively, Chaz Mostert and Fabian Coulthard were among those to miss the cut.

James Courtney was fifth after he couldn’t quite piece together a hugely committed lap on his final run, and Craig Lowndes qualified for what will likely be one last Bathurst shootout for the imminent retiree.

Under overcast skies but finally on a fully dry track, Reynolds opened proceedings with a 2:05.9919s in the #9 Penrite ZB Commodore.

By the time the field had been through for a second flyer, last year’s pole-sitter Scott McLaughlin wheeled the #17 Shell V-Power FGX Falcon to a 2:05.3913s, and lowered that to 2:05.3246s next time around.

Reynolds was on to go back to the top at the start of his second run when he locked up and ran up the road towards Bathurst town at Murray’s corner, his second off of the session.

After two runs out of four, Reynolds was down in 14th due to his error, as Whincup headed Courtney and van Gisbergen.

The 2017 Great Race winner then went just 0.0041s short of Whincup’s best at the time, having gone fastest to the second sector.

Courtney banked a 2:04.4759s and McLaughlin slotted into second position at less than a tenth slower, before Whincup reclaimed the lead with a 2:04.3021s.

With half an hour elapsed, a red flag was called for Jack Le Brocq, who hit with the wall when he ran off at Hell Corner in the #19 Tekno Autosports ZB Commodore.

At the time, it was Whincup on top from Courtney, McLaughlin, Reynolds, van Gisbergen (#97 Triple Eight ZB Commodore), and Mostert.

Courtney threw his WAU machine around Mount Panorama when the session resumed, barely missing the wall exiting Forrest’s Elbow as he went personal best to the second sector.

However, he couldn’t get the car stopped to his liking at The Chase and didn’t improve on aggregate.

Lowndes (#888 Autobarn ZB Commodore) lifted himself from 14th to fourth to book his place in tomorrow afternoon’s one-lap dash.

It proved to be enough when Reynolds, who was fastest to the second sector, came up 0.1555s short of Car #1 just before the chequered flag.

Whincup explained that the rain in the lead-up to this afternoon’s session made for a challenging scenario.

“That was intense,” said the four-time Bathurst 1000 winner, who was a tenth faster than last year’s provisional pole time.

“I’ve done a lot of laps around this place, but never no practice in the dry before quali, (with) new tyres and just hanging on the edge.

“We’ve improved the car, which is great; I’m so glad we went out in the last one (Practice 5) and got the most out of it otherwise we would have been pipped.

“All in all, car felt good; great to see the three (Triple Eight) cars in the top 10.

“That’s by far the quickest I’ve been around this place in a Supercar; felt good, couldn’t be happier.

“I had no idea what anyone else was doing; I knew I had done a four (point) three, I knew there was a little bit more in the car.

“We made a few tweaks and then got another couple of tenths out of it. I’m just keen to watch the replay and see exactly what happened.”

Cameron Waters (#6 Monster Energy FGX Falcon) had a lap ruined by the red flag but regrouped to take seventh, one position behind Lowndes.

Mostert was first on the outside in the #55 Supercheap Auto FGX Falcon, Coulthard couldn’t lift the #12 DJR Team Penske FGX Falcon from 15th after the chequered flag, and Mark Winterbottom was only 19th in the #5 Monster Energy FGX Falcon.

The sixth and final practice session starts tomorrow at 1000 local time/AEST, while the Armor All Top 10 Shootout is scheduled for 1710.