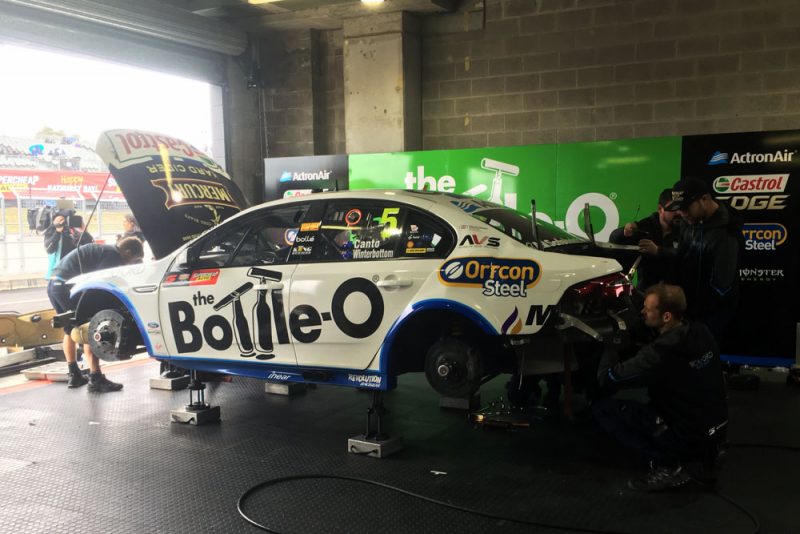 Tickford Racing boss Tim Edwards is confident the team will have the Mark Winterbottom/Dean Canto The Bottle-O Falcon repaired in time for the next practice session following a crash late in the morning’s co-driver only session.

Having just set the second fastest time, Canto lost control of the car at Forrest’s Elbow, damaging the rear end of the car after he skated into the concrete wall on the outside of the corner.

Starting in wet conditions, the circuit dried throughout the 60-minute session, though remained damp off line, a state of affairs which caught out Canto as he ran half a car width wide.

The incident, which saw the car with all four wheels off the ground as it was whipped around 360 degrees after impact, drew the red flag with the session not restarted as officials recovered the stricken Falcon.

Despite a laundry list of items to be repaired, team boss Tim Edwards is confident that the car will be ready for Practice 5, which is scheduled to begin at 1115.

“It’s a little bit more than cosmetic but we’ve got everybody on it at the moment,” Edwards told Speedcafe.com.

“We should be okay, we’ve got an hour and 20 minutes until the next practice.

“Obvously we’ve got a lot of spares built up that we’ll be putting on the car but all the rear rails and all the rear gutters for the boot have been pushed across to the side.

“We’ve got a bit of work to do to straighten it out, but a bit like we did with Chaz’s car at Sandown (but) it’ll look fine from the grandstand.”

Edwards also confirmed the crash was driver error, with Canto caught out by the damp surface.

“That was the one corner on the track that was still a bit moist, and he ran wide on the corner before,” he explained.

“Obviously that was a bit wet there and just changed his trajectory.”