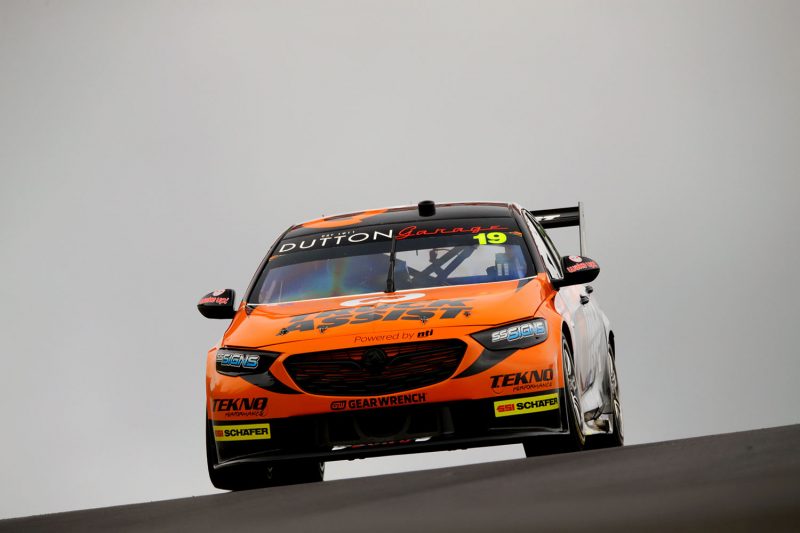 Jack Le Brocq believes that his crash during Armor All Qualifying will not be a major setback for the Tekno Autosports crew.

Le Brocq ran off at Hell Corner half an hour into the session and clouted the concrete wall.

While the ZB Commodore hopped to a halt on the grass on driver’s right, bringing out the red flag, he says that there are no serious concerns over the state of the car.

“It’s (steering) arms and bits and pieces why we couldn’t go on,” explained Le Brocq.

“It’s not the chassis or anything like that; that’s the positive I suppose if you can get anything out of it.

“It’s a shame for the guys, but it’ll be ‘right. We always seem to bounce back in the race and have a good race car.

“We’ll go again tomorrow and hopefully have a good run on Sunday.”

Le Brocq admitted fault for the error, which consigned the car which he will share with Jonathon Webb to the back row of the grid having lost a fastest lap time good enough for 22nd.

While the track was dry, it was the first such running for primary drivers all weekend, which contributed to the prang.

“I locked a left-front, carried too much in and that was the end of it,” recounted Le Brocq.

“I got on the wet grass and it wouldn’t slow down at all and got the wall.

“It was just a silly mistake. I was keen to get another set of tyres on it and keep building on it. It was one of those sessions every lap you did you were getting better and better and more confident with it all.

“Because it’s been so wet, as soon as it went on the grass it felt like it was sped up, that’s how slippery it was.

“It’s always difficult when it’s like that,” he added in reference to the lack of dry running before qualifying.

“It’s a shame we couldn’t get out the other end straight, but we’ll build on it and go again.”

Car #19 is set to have one final appearance before Sunday, when Practice 6 takes place for an hour tomorrow morning from 1000 local time/AEST.