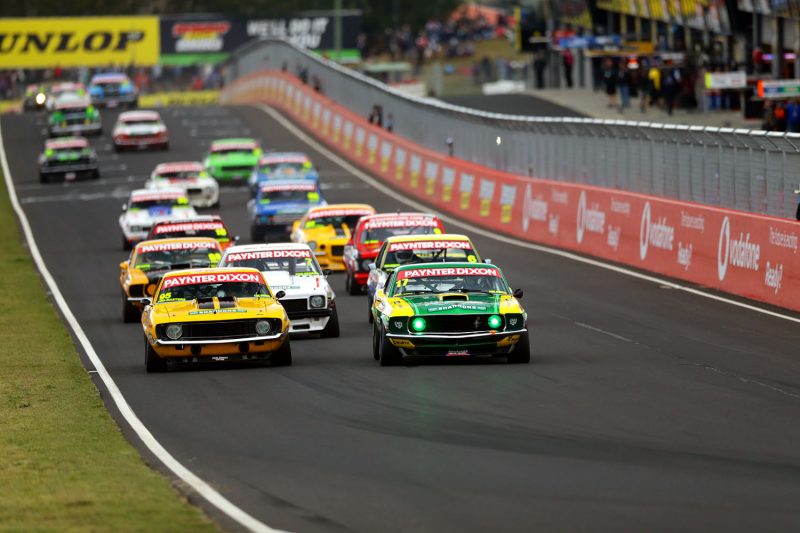 The start of Race 1 for Touring Car Masters

Steve Johnson scored his 13th victory of the season in the opening Paynter Dixon Touring Car Masters race of the weekend at the Supercheap Auto Bathurst 1000.

A dry track greeted drivers on Friday, with Johnson (Ford Mustang) getting away cleanly off pole to lead Adam Bressington (Chevrolet Camaro) up Mountain Straight.

It wasn’t long before the Safety Car was deployed after an incident involving Brad Tilley (Ford Falcon) and Ian Woodward (Chevrolet Camaro) at Reid Park.

Tilley was up the inside of Woodward on entry to the right-hander, but made contact, turning the latter hard into the outside wall.

On the Lap 3 restart, John Bowe (Holden Torana) began his charge up the field after starting from eighth on the grid, slicing his way into the top five as Johnson opened up a comfortable lead out front.

Ryan Hansford, who was running in the top five, was forced to pit after slowing on Conrod Straight with his Holden Torana stuck in gear.

Not long after, second place man Bressington also had to pit with a front left tyre issue at the start of the final lap.

This left Bowe in second, as Johnson came home 4.6s ahead of the Torana driver, with Mark King (Chevrolet Camaro) completing the top three.

The Touring Car Masters Trophy Race gets underway on Saturday at 0755 AEST. 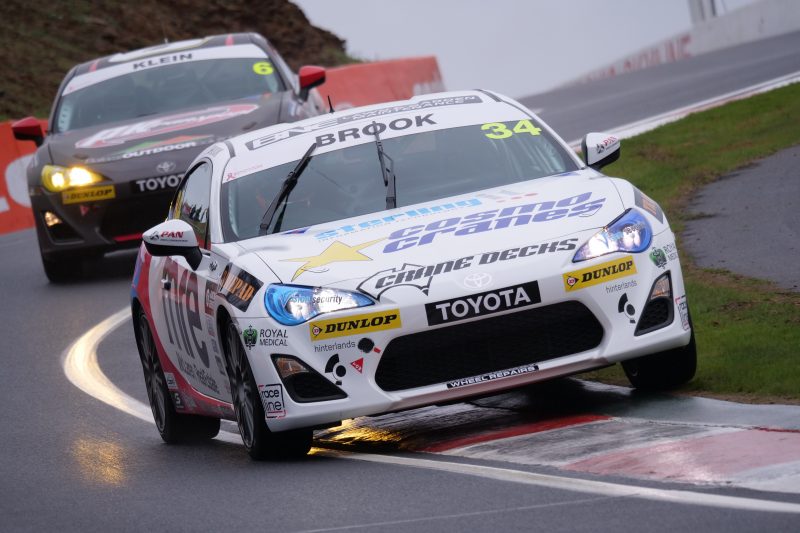 Series leader Tim Brook has taken pole position for Race 1 of the Toyota 86 Racing Series in a greasy qualifying session.

As the session got underway, the rain began to cease, but an early red flag was needed when Jaiden Maggs spun on entry to Murray’s Corner and found himself in the gravel.

After a five-minute delay, the field returned to the circuit with the first flying laps abandoned due to the red flag.

Brook immediately went to the top of the timesheet on a 3:04.052s, but Luke van Herwaarde managed to go a second quicker with the track conditions rapidly improving.

The next time around, Brook went back to the top, but once again, he was bettered, this time by Jake Klein on a 3:01.468s.

In the dying stages, Brook returned to the top spot, with the Sydneysider lowering the benchmark to a 3:00.286s.

His position was not challenged, as a series of incidents on track meant some drivers behind him were unable to improve as a result of having to slow for the yellow flags.

Kane Baxter-Smith looped his car at Sulman Park, making contact with the outside wall and coming to rest at the scene of the accident.

Later in the lap, Richard Peasey became beached in the gravel at The Chase as well.

Second place was Klein who ended up 1.1s off the pole time, ahead of David Sieders, Zane Morse and New Zealander Michael Scott who completed the top five.

The Toyota 86 Racing Series has its first race on Saturday at 0820 AEST.