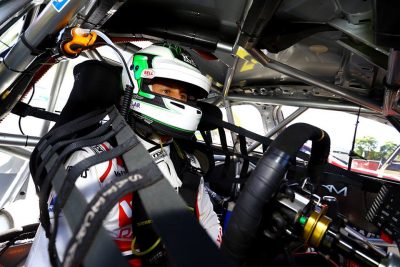 Chris Pither set the pace in a mostly dry Practice 2 for the Dunlop Super2 Series at Mount Panorama as Earl Bamber was brought undone by a mechanical problem.

Pither set a 2:07.3719s in the #44 Garry Rogers Motorsport VF Commodore between two red flags, the latter of which brought an early end to the session.

It left him nearly half a second ahead of next-best, which happened to be last year’s Bathurst 250 winner, Macauley Jones (#14 Brad Jones Racing VF Commodore).

There was an early red flag when the #10 Grove Racing VF Commodore seized at pit entry with Bamber, who is co-driving with Brenton Grove this weekend, behind the wheel.

The New Zealander had already reported a gearbox problem and was on his way to the lane when the transaxle locked the rear wheels as he downshifted, obstructing the avenue to the pits.

Pither and Jones were among half a dozen that did not have a chance to set a lap time when the session was neutralised, but both temporarily took over top spot when they got their first chances to turn a flyer.

The GRM Pirtek Enduro Cup co-driver set the fastest lap next time around, before a lull of sorts in proceedings.

While the track was very much dry, there were still spots of rain on camera lenses and reports of falls across the top.

Furthermore, Pither’s benchmark was still 1.7s away from that of the corresponding session last year.

It may have been the changeable conditions which caught Nathan Morcom out when he ran well wide just above Forrest’s Elbow and slugged the wall in the #54 Eggleston Motorsport VF Commodore.

That crash drew another red flag with around seven minutes remaining and the session did not restart.

There was also a drama during the first red flag when Adam Marjoram was seen moving backwards in pit lane in the #15 Image Racing VF Commodore, although it is not clear if he had pulled reverse gear or was merely rolling due to the slope of the lane.

Zane Goddard had a nervous moment just prior when he sailed off at The Chase due to a cut brake line in the #8 Brad Jones Racing VF Commodore, but was unscathed.

Armor All Qualifying for tomorrow’s 41-lap enduro starts this afternoon at 1505 local time/AEST.