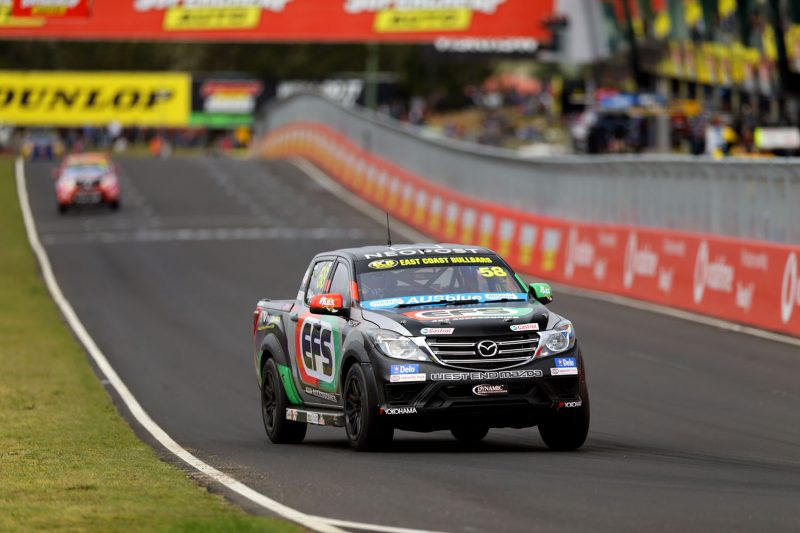 Ryal Harris has won SuperUtes Race 1 at Mount Panorama in convincing fashion after a brave Lap 1 move on Craig Dontas.

Harris took a 6.3320s win as Craig Dontas and Ben Walsh filled the minor placings in the six-lap affair.

Dontas had powered ahead up Mountain Straight after he and Harris ran side-by-side through Hell Corner from the rolling start.

Harris went to the outside of the Armor All Pole-sitter again at The Cutting, where the track was still wet off the racing line, and stayed there, allowing him to make the pass on exit after side-to-side contact.

The #58 Peters Motorsport Mazda BT-50 led by 2.2290s at the end of the opening lap and never looked back, while Dontas had a similarly lonely race to second in the #87 Sieders Racing Team Mitsubishi Triton.

Woods, the series leader, started third in the #64 WSM Hilux but struggled for pace throughout and just held off Jane (#1 Steve Wilson Racing Isuzu D-Max) for seventh.

Mick Sieders got himself classified a finisher in 12th, a lap down, after pulling into pit lane at the end of the warm up lap.

He had qualified the #45 SRT Triton fourth on the grid.

Tomas Gasperak was a non-finisher with a technical issue after the #18 Team 18 Holden Colorado also failed in qualifying.