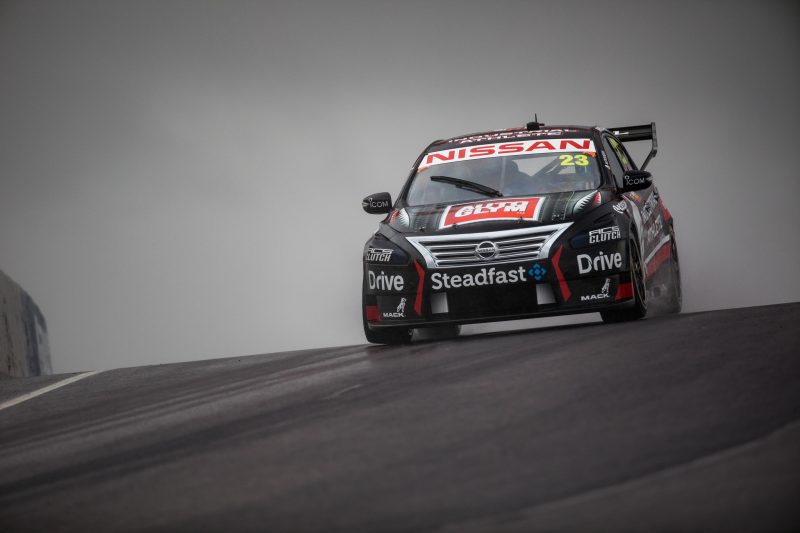 Michael Caruso set the fastest lap as the rain returned for the final practice session before Armor All Qualifying for the Supercheap Auto Bathurst 1000.

Caruso had a brief spell on top before jumping back up in the last minute of the hour-long session with a 2:26.2070s in the #23 Industrial Athlete Nissan Altima.

The time bettered the then-best of Nick Percat in the #8 Repco Authorised Service ZB Commodore by almost four tenths of a second.

Percat went faster again as the session timed out but came up 0.0638s short of Caruso’s mark before they were split by Rick Kelly, who went only 0.0166s slower than his team-mate in the #11 Castrol Nissan Altima.

“Hard to know,” said Caruso of his confidence levels ahead of qualifying.

“We all sort of guessed that it (rain) would be done by now (but) what have we got to lose?

“We’re here, we’ve got petrol, we’ve got tyres; let’s go out there and go around just in case it’s wet in quali.

“Good little hit-out. We’ve had our fair share of little dramas, already done an engine change (yesterday); they did a great job because the car is obviously running well.”

Richie Stanaway (#56 Rabble.Club FGX Falcon) spent long periods as the fast man but was shuffled back to fourth and more than half a second off the pace as he sat out the last 10 minutes.

“Obviously we expected it to be dry,” said last year’s Sandown 500 winner.

“I was pretty comfortable out there which is why we just kept doing laps. I guess other people must feel a bit uncomfortable, which is why they’ve parked it up.

“For whatever reason, the car just seems quite stable and predictable, which is obviously what you want in the wet.

“Don’t know what the conditions will be like for qualifying.

“At least if it’s wet then we’ve done some mileage beforehand and we’ll feel nicely prepared if it’s wet, but if it’s dry, it will be tricky as none of us have really done any laps in the dry.”

The session began in showers and while the weather gradually cleared, the track remained wet.

Mark Winterbottom cut early laps for the purpose of a systems check for the #5 The Bottle-O FGX Falcon which was crashed by Dean Canto in Practice 4.

He reported some braking issues during his first run which were corrected during the session.

Craig Lowndes’ #888 Autobarn ZB Commodore continued to be plagued by power steering problems as the veteran ended up 18th.

A total of 21 cars took to the track, although the #1 Red Bull HRT ZB Commodore did only an out-in lap in the hands of Jamie Whincup.

No co-drivers took part despite the session being open to all drivers.

Armor All Qualifying, which will set the Top 10 Shootout starters and lock in the rest of the starting grid for the Bathurst 1000, starts at 1550 local time/AEST.