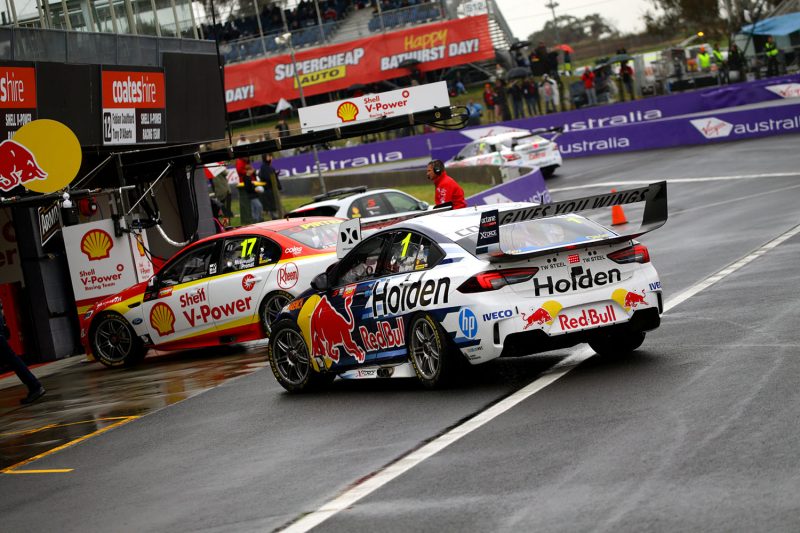 Jamie Whincup says that there was little to achieve in the wet conditions which persisted during Thursday’s practice running at the Supercheap Auto Bathurst 1000.

The #1 Triple Eight entry was one of many to spend much of the day’s three one-hour practice sessions in pit lane due to the persistent rain.

With the remainder of the weekend set to be dry, a number of teams took the opportunity to practice driver and brake disc changes rather than log laps in the rain.

Whincup completed 15 laps in Practice 1, with the Red Bull Holden Racing Team Commodore not leaving the garage for the remainder of the day.

“We worked pretty hard in the last week on a plan,” Whincup told Speedcafe.com.

“(We) Decided to sit out P2 and P3 considering that it’s most likely going to be dry for the weekend.”

Whincup admits it could be a costly strategy should the forecast change prior to qualifying.

“Potentially, if it’s wet for Quali tomorrow, then we will be slightly disadvantaged; that’s the risk we took.”

He also played down suggestions the decision to sit out practice was a result of being overconfident following a dominant one-two-three finish for the team at Sandown.

“That’s the only thing that we’re nervous about,” said Whincup.

“[The reason] we would have run is to not put out the perception that we’re overconfident.

“We’re not overconfident, there was just nothing that we could have achieved with our plans.

“There’s no arrogance, there’s no overconfidence thing going on; there was nothing that we could have achieved today in the wet, so we decided to sit it out.”

Although Dumbrell didn’t turn any main game laps on Thursday he was able to get on track during the practice session for the Dunlop Super2 Series.

Despite the lack of seat time, he still felt the day was productive.

“Back inside the garage, we did some brake changes, pit stop practice and driver change practice, so we got all of that stuff out of the way, things which we had planned to do later in the weekend, so it wasn’t a waste of a day,” he explained.

The Virgin Australia Supercars Championship will be back out on track for Practice 4, a designated co-driver only session, on Friday at 0830 AEST.