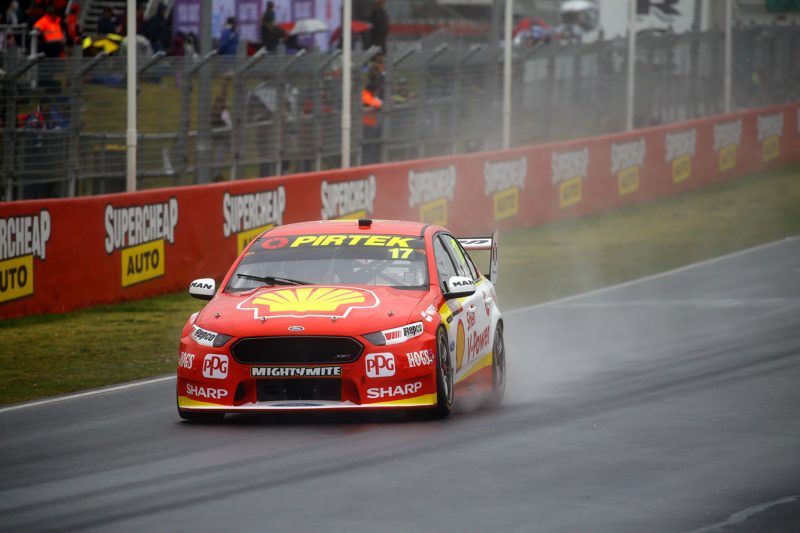 Cars were thin on the ground for much of the hour-long co-driver session with only eight reaching a double-digit number of laps.

Conditions hardly improved during the session, if at all, and the fastest lap for the #17 Shell V-Power Ford was over 10 seconds away from Will Davison’s Practice 1 benchmark.

“It was pretty good,” said Premat.

“We went through our process and plan going through that session and towards the end it got a bit harder because there were only a few cars on track so it was aquaplaning in a straight line.

“We went through a few things in the car; car felt pretty good in the wet conditions.

“We know that this weekend is going to be dry, especially Saturday and Sunday, so just trying to get some miles and going through the plan with Ludo and the boys.”

Garry Jacobson was fastest first up and had moved back into top spot with a 2:35.8261s in the 17th minute before immediately putting the cue in the rack.

The #11 Castrol Nissan Altima ended up 0.6437s off the pace when Premat finally dislodged him from first position, approximately 40 minutes later.

“The main agenda today was to get comfortable,” said Jacobson, who is co-driving for Rick Kelly.

“We could have done more laps, but I think we both felt pretty comfortable today after six laps each in the wet. We’re feeling good.”

Earl Bamber did even fewer laps in the #97 Red Bull HRT ZB Commodore but was temporarily fastest with the 2:35.9013s which stood up for third-fastest.

Dean Canto (#5 The Bottle-O FGX Falcon) finished the session in fourth while Tony D’Alberto moved up to fifth on his 14th and final lap in the #12 DJR Team Penske FGX Falcon.

An engine problem cut short track time for the #23 Industrial Athlete Nissan Altima of Michael Caruso and Dean Fiore as latter set just the one, somewhat representative lap during the session.

The sister #78 Harvey Norman Nissan Altima and Tickford’s #56 Rabble.Club FGX Falcon also spent time in the garage at the start of proceedings due to a gearbox and sensor problem respectively.

Practice 3, which is open to all drivers, starts at 1505 local time/AEST.