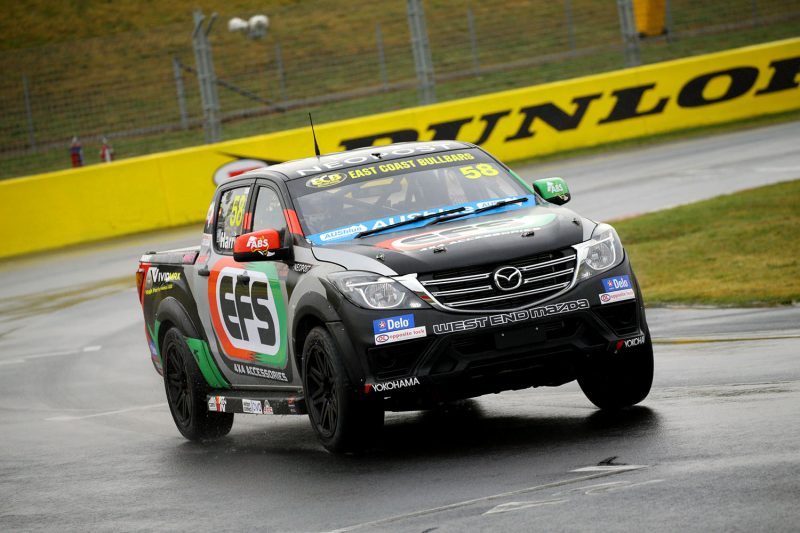 Ryal Harris was quickest in another rainy Practice 2 for the ECB SuperUtes Series at Bathurst after Craig Dontas’ late challenge fizzled due to a spin at The Chase.

Harris improved on almost every single lap in the #58 Peters Motorsport Mazda BT-50 and moved the mark to a 3:05.3750s after the chequered flag.

Practice 1 fast man Dontas was following on-track at the time and threatening to take over the mantle as he went fastest to each of the first two sectors.

However, he spun the #87 Sieders Racing Team Mitsubishi Triton at The Chase and remained second, 0.8604s off the pace.

Dontas nevertheless has the fastest combined time having been over a second faster in Practice 1, which was also weather-affected.

Series leader Craig Woods was third for the entire session in the #64 Western Sydney Motorsport Toyota Hilux at 1.4595s off than the fastest lap.

Harris’ team-mate Aaron Cameron was twice as far away in fourth in the #95 BT-50 while Ben Walsh (#8 Western Sydney Motorsport Toyota Hilux) rounded out the top five. Matt MacKelden backed into the wall on approach to The Dipper when he lost control halfway through the 20-minute session.

The #99 SRT Hilux first made rear-end contact with the wall before slapping the concrete side-on as it dropped down the hill.

MacKelden returned to the paddock and took no further part in practice.