The proposed site for the Bathurst second circuit

Speedcafe.com has visited the site for the proposed second circuit at Bathurst which is hoped to be up and running within five years.

Plans to construct a new permanent circuit at Mount Panorama are in full swing with UK firm Apex Circuit Design now working on a track design for a 200 hectare site west of McPhillamy Park. 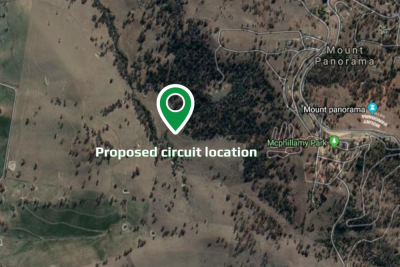 The location of the Bathurst second circuit

As previously reported the facility will cost in the region of $52 million of which $25 million has been accrued from Federal and State government grants.

Bathurst Regional Council showcased the site to Speedcafe.com ahead of this weekend’s Supercheap Bathurst 1000.

Council has told this website that Apex Circuit Design has been asked to deliver a master plan for a minimum 4.7km track which can be split into two separate layouts.

Courtesy of the rolling hills at the site, the circuit will be carved into a valley while taking advantage of the topography with 40 to 50 metres of elevation expected across the facility.

The site will create a natural amphitheatre which BRC hopes will provide spectators with panoramic views of the circuit.

Apex Circuit Design and its design director Dafydd Broom visited the site last month to assist with its design process which is expected to be completed in the first quarter of 2020.
Once delivered BRC will then submit the documents for planning approval.

Supercars has already indicated a wish to hold an event at the circuit once up and running.

VIDEO: Speedcafe.com visits the site for the Bathurst second circuit