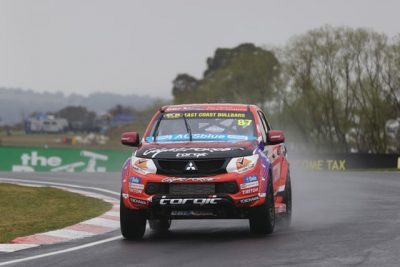 Craig Dontas has set the pace in a wet opening to Round 6 of the ECB SuperUtes Series at the Supercheap Auto Bathurst 1000.

Ryal Harris was on top until well after the chequered flag, when Dontas laid down a 3:04.3385s in the #87 Sieders Racing Team Mitsubishi Triton.

Harris had started off with a 3:07.1930s on his first flyer, with the track wet and light rain still falling.

Series leader Craig Woods improved with the clock at zero to briefly sit second in the #64 Western Sydney Motorsport Toyota Hilux before he was bumped by Dontas.

The top three were covered by 1.3099s while Mick Sieders ended up fourth in the #45 SRT Triton.

The latter was half a second faster than team-mate Cristopher Formosa in the original #49 Ranger.

Mick Sieders’ run into the escape road at Murray’s Corner was the most notable incident despite the tricky conditions.