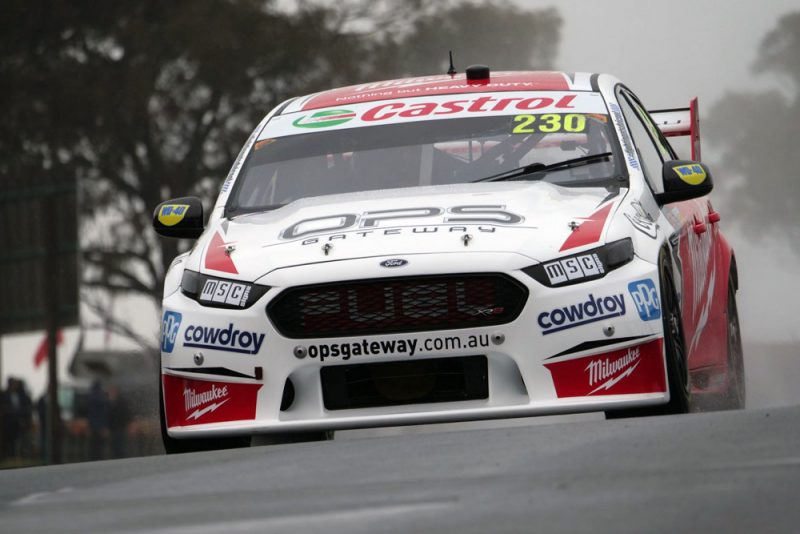 Will Davison has gone fastest in a wet start to proceedings at the Supercheap Auto Bathurst 1000.

Davison was prominent near the top of the timing screen for much of the hour-long session but had been shuffled to eighth as drivers completed their final laps.

However, he jumped to the top with a 2:25.0243s in the #230 Milwaukee FGX Falcon, putting him more than half a second faster than another former Bathurst 1000 winner in Chaz Mostert, who was second-best in the #55 Supercheap Auto FGX Falcon.

“It’s really hard to learn much when it’s greasy like that,” said Davison, who is sharing his 23Red car with brother Alex in the Pirtek Enduro Cup.

“You make a few changes to the car, but you can’t really learn too much besides tyre pressure (and) we know how critical that is.

“Whether it’s full wet, or intermediate or these drying conditions, there’s no right or wrong; it’s just trying to know what’s right for the conditions.”

Aaren Russell got into Andre Heimgartner’s #7 Castrol Nissan Altima late in the piece to set what was ultimately the third-fastest lap of the session and he was followed on the timesheets by team-mate Michael Caruso (#23 Industrial Athlete Nissan Altima).

Van Gisbergen had been more than two seconds clear of field at times, and was nearly a full second faster than the rest when he set the 2:26.3577s Car #97 was ultimately classified with.

The #56 Rabble.Club FGX Falcon ended up 11th after Richie Stanaway had left it on top of the timesheets when a red flag came out in the 37th minute.

According to reports from multiple teams, the stoppage was due to the presence of kangaroos near the circuit.

The latter has its power steering system bled during the session.

“We tried to learn as much as we could,” said McLaughlin.

“We feel comfortable, it’s very predictable, which is nice, but probably not pushing the limit just yet.”

Practice began with a very wet track but rain ceased falling midway through and a noticeable dry line had formed for the final quarter-hour.

Tim Blanchard was the only driver to try slicks but reverted to wets within 10 minutes.

It was noteworthy, however, that Mostert was still searching for water on Conrod Straight during his fastest lap.

“I probably expected the session to rain more towards the end there.

“Bit of a dry line out there, so I reckon the last lap or two could have been slicks.

“Just running around, doing our brake program and all sorts of things to get ready for the weekend. Try to keep it off the wall.”

Almost half the field ran co-drivers through their cars at some stage during the session, but Erebus Motorsport opted to keep its ZB Commodores in the shed for the duration.

There were a number of minor offs, most often at Murray’s Corner, but no noticeable damage incurred during the 60 minutes.

Practice 2, for co-drivers only, starts at 1255 local time/AEST.