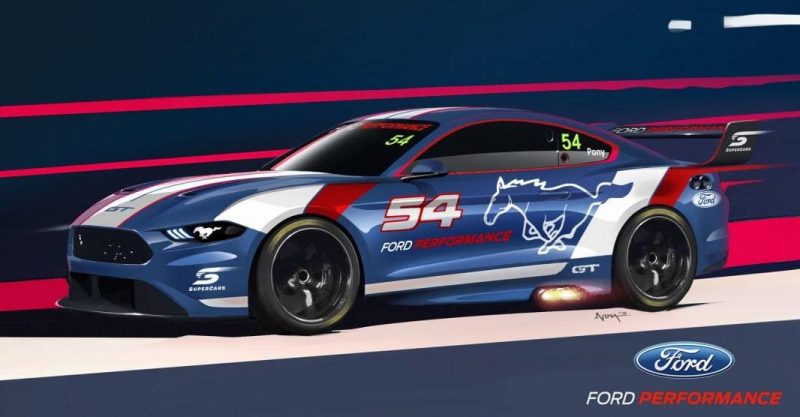 Ford Performance has provided Speedcafe.com an update on the development of the Ford Mustang Supercar due to debut in 2019.

While Ford is not yet ready to reveal its 2019 Supercars Mustang, aerodynamics supervisor Tommy Joseph spoke to Speedcafe.com about its development.

Joseph pursued an aerodynamics degree from the University of Southampton in England, then spent 12 years in Formula 1 with teams including Red Bull, Williams and Sauber prior to returning home to America to work for Ford.

SPEEDCAFE: What’s the current status of the 2019 Mustang Supercar?

TOMMY JOSEPH: “We’re going through the processes with the sanctioning body and our teams, using the tools we’ve got along with the stylists in Australia, to evolve that car. I think our tools and methods are very advanced – some of the best – but that’s why we race is to prove that statement.”

SPEEDCAFE: The Technical Centre was essentially created to assist Ford’s NASCAR effort. Does anything carry over to Supercars?

JOSEPH: “We’re not starting from scratch, we’re starting from a body that we know so we have a good understanding of how that shape of car performs. A lot of the basic objectives are the same between NASCAR and Supercars. The only exception is the amount of side force; NASCAR cars are asymmetric and race mainly on ovals, so they generate a lot of side force. 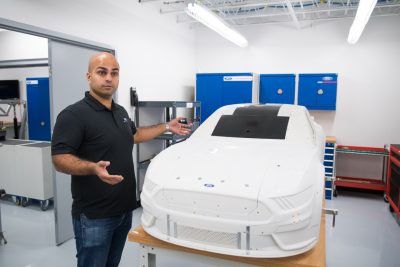 Tommy Joseph, Aerodynamics Supervisor for Ford Performance pictured next to a wind tunnel model of the Mustang NASCAR

“That doesn’t really apply to a car that has to turn left and right and race on a road course. The downforce and the drag are similar. We know that shapes that we’ve modified, like the headlight and fog light area, can be sensitive. We’re trying to use a lot of the same engineers that have gone through that process on the NASCAR side. They already have a personal connection to the Mustang as a race car.”

SPEEDCAFE: Is the Supercars series trending more toward a spec car?

JOSEPH: “They are moving toward some spec items but also trying to keep it all tied to that production car and use those unique parts, and of course use the sheet metal that comes off the production line. Just like NASCAR, they are trying to establish parity. That’s a good idea, because we want good racing. We don’t want any disadvantages, but we also don’t want any unfair advantage. So we are trying to build a car that is competitive to the limits that the rules set.”

SPEEDCAFE: Will the Supercar look more like a Mustang than the NASCAR Cup and Xfinity Series cars?

JOSEPH: “In some areas, yes. The NASCAR cars are more restricted in the greenhouse shape and the rear bumper. In those areas, we’ll get better representation because the rules allow for it. The good thing about the Mustang is it’s already a high-performance car in its production form, and in some racing series, we actually have to detune it aerodynamically to make it comply. If you take a Mustang body and stretch it or shrink it to fit the rules, its already at a good level. Wherever they set the boundaries of parity, we always want to be on the high-performing edge of that.”

SPEEDCAFE: When will you reveal the Supercars Mustang?

JOSEPH: “It will be late this year or early next year. We’re still in the process of submission, and of course we need that rubber stamp before we know what we will be racing. That’s laid out by the sanctioning body, and that’s when we’ll show the car.”