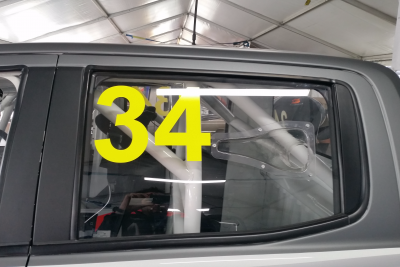 The last three V8 Ute Racing Series winners will be present in the ECB SuperUtes Series field this weekend after the late addition of David Sieders.

Sieders will take the reins of Ranger Racing’s second Ford Ranger, which is being introduced to the series this weekend after a shakedown on Sunday.

He will take the place of Matt Nolan, who has had to withdraw due to a family commitment after he was to fill in for Chelsea Angelo.

Christopher Formosa, who has raced the first built Ranger since the start of the season, says that the presence of the experienced Sieders will be a boost for the Sydney-based team run by his father Michael.

“David Sieders is filling the spot,” he confirmed to Speedcafe.com.

“He’s raced a lot of things over the years so he’s been around for a while and he’s got a bit of experience.

“That’s what’s good about having a second car in the team; we can work together and share data.

“It’s been hard not having another Ranger to go off data with. It’ll be good to finally see what works and what doesn’t.

Sieders won the V8 Utes series in 2016, Kim Jane did so last year, and Ryal Harris has three to his name.

Jane is also making his first start in the new category as a stand-in for Steve Wilson in his Isuzu D-Max.

He will race in Car #1 this weekend, instead of Wilson’s usual #3, in reference to taking out the last ever V8 Utes series.