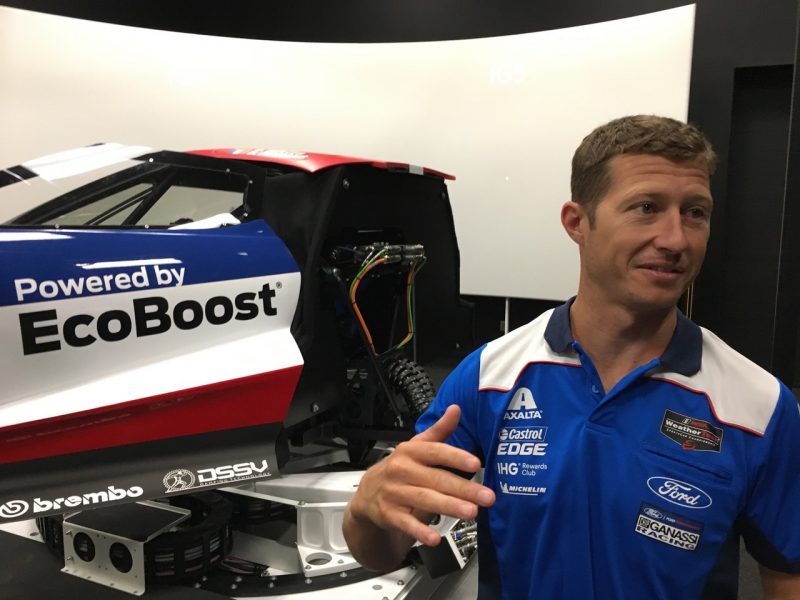 Australian sportscar star Ryan Briscoe is set to complete a demonstration run of the Ford GT during Bathurst 1000 weekend having logged a test session in the simulator at the Ford Performance Tech Center in preparation.

Briscoe, and co-driver Richard Westbrook scored the first race win for the Ford GT program in 2016, and the duo are locked in a tense fight with Corvette Racing’s Antonio Garcia and Jan Magnussen for this year’s IMSA GT Le Mans class championship.

The 37-year-old won seven IndyCar races for Team Penske prior to his switch to sportscars with Chip Ganassi Racing.

The Sydney native is eager to return to Bathurst, five years after the last of his five appearances as a guest driver in the Great Race.

“I am really excited – it’s such a magical place,” Briscoe told Speedcafe.com.

“You rate it up there with places like Indianapolis and it’s just a really special place to go, especially over the weekend of the Bathurst 1000.

“That’s what any die-hard Australian race fan lives and breathes for.

“I’m pretty proud to be able to show off the car.

“It’s such a rare car and people get excited when they see it for the first time.

“We’ve been having a lot of fun racing it and to take it around Bathurst is a driver’s dream.”

Briscoe was happy to turn laps in the simulator, a key component of the four-year old Ford Performance Tech Center.

Ford’s simulator features 400-pound modular ‘bucks’ that allow drivers to sit in an exact replica of the GT, Ford’s NASCAR entries, and production versions of the Mustang and Focus. “The nice thing about being in the buck is everything is the same as the real car,” Briscoe remarked.

“We’ve got the same steering wheel and controls, and even things like the same blind spot in the A-pillar that’s exactly where you want to be looking!

“Simulators started out as a great tool for drivers to learn tracks, but now they have become a great substitute for being at a race track.

“You can get so much more done. You can run through so many more changes in a day and get so much information.

“It’s still in the development stage where you still want to verify a bunch of stuff on the racetrack, but they are an incredible piece of machinery and you can get in there and feel like you are in the real thing.

“It was nice to get a taste of how the GT going to feel and take steps to make sure we get the set-up right – and it was an excuse for me to get into the simulator to drive Bathurst.”

Briscoe admitted that he still has the desire to compete in the Bathurst 1000 again, but said it’s a difficult task for a driver committed to an overseas championship.

“I’d love to do the Bathurst 1000 again but they’ve sort of made it difficult for co-drivers who are racing outside of Australia,” he noted.

“To do Bathurst, you really have to do the triple enduro thing.

“The last time I did it in 2013, I was racing in IMSA at the same time that year and it was such a commitment flying back and forth.

“You have races either side of races, down there or up here, and if you’re running for a championship, you just run yourself into the ground and you also don’t give them (the Australian team) your best either.”