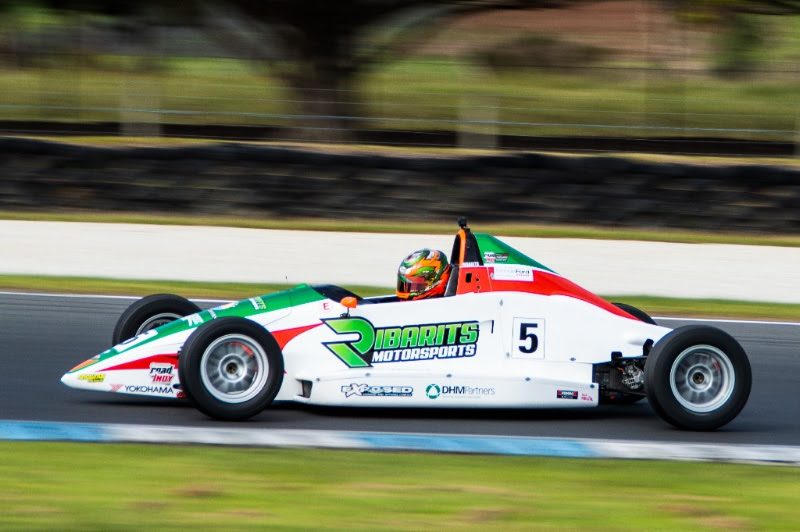 Hamish Ribarits is just 11 points off the Australian Formula Ford series lead with one round remaining after two down-to-the-wire race wins at Phillip Island.

Sonic Motor Racing team-mate and series leader Hunter McElrea, on the other hand, struck trouble in Race 2 having won the opener.

Ribarits qualified fastest but it was McElrea who spent the eight-lap race out front as multiple cars battled for second position.

The pole-sitter started the final lap in second but was shuffled back to fourth, behind runner-up Zac Soutar (Team Soutar) and Nathan Herne (BF Racing), by the chequered flag.

Ribarits, however, took line honours when he beat Herne in a drag race, with Soutar less than 0.3s behind the winner in third.

The final race of the weekend was a similar story as Ribarits edged Herne by 0.05s, a larger margin than in the previous encounter.

Soutar was again next-best, having seen off Thomas Sargent (Tegra Australia), while McElrea got back to fifth.

After arriving at the Island 38 points off top spot, Ribarits now has his destiny in his hands given that a sweep of the final round would guarantee him the title.

“I’m stoked, the team at Sonic Motor Racing Services gave me a great car all weekend,” he said.

“The racing was really close within the field and the tow came into play massively, as expected, and I enjoyed some awesome battles all weekend.

Herne finished the round third, his first national round podium, and also clinched the Victorian Formula Ford title

Leanne Tander won all three races in the 1600 class with outright finishes of 17th, 16th, and 19th, in her return to Formula Ford.

The national title will be decided at Sydney Motorsport Park on October 26-28.