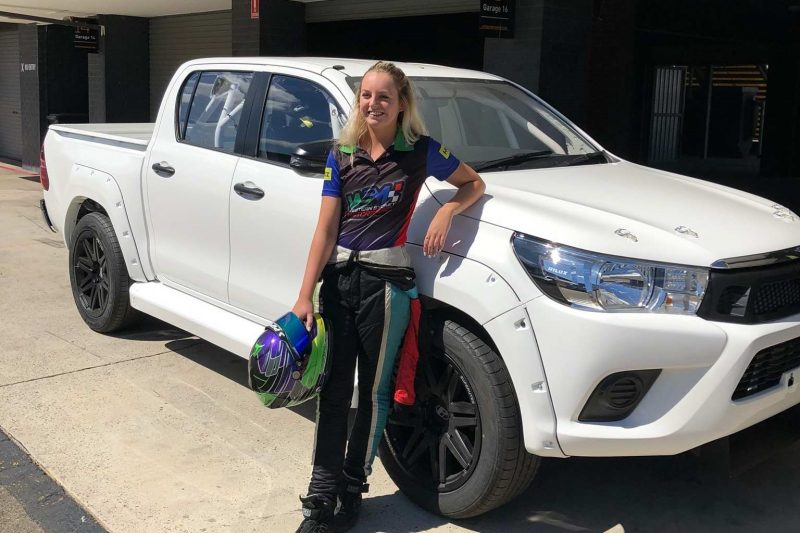 Charlotte Poynting with the Toyota Hilux at Sydney Motorsport Park

Charlotte Poynting’s place on the grid in a brand-new Toyota Hilux at this weekend’s ECB SuperUtes Series round at Bathurst has been confirmed.

Sieders Racing Team (SRT), which prepares WSM’s SuperUtes, had been racing the clock to have the car ready for Bathurst.

It will now be running 10 cars this weekend across SuperUtes and the Toyota 86 Racing Series.

Poynting, who has raced in Aussie Racing Cars since early-2016, will be making her SuperUtes debut at Mount Panorama.

While concentrating on the former when the two series run at the Gold Coast 600, she will be back in the Hilux on her home streets at the Coates Hire Newcastle 500 in November.

The new Hilux, the fourth in the series, will carry the city council’s tourism/commercial campaign branding in addition to major sponsorship from local building firm Sehez.

Ranger Racing has also added a car with a second Ford Ranger to now be driven by Matt Nolan after the withdrawal of Chelsea Angelo, making for what is set to be a 13-car field.

There are also driver changes at SRT and Steve Wilson Racing.

Craig Dontas will get back behind the wheel of one of the former’s two Mitsubishi Tritons, while Kim Jane joins Poynting and Nolan on debut when he stands in for Wilson in the Isuzu D-Max.

The SuperUtes will run their standard three-race format at Mount Panorama, beginning with 20-minute practice sessions on Thursday at 0815 and 1435 local time/AEST. The livery which will be applied at Bathurst