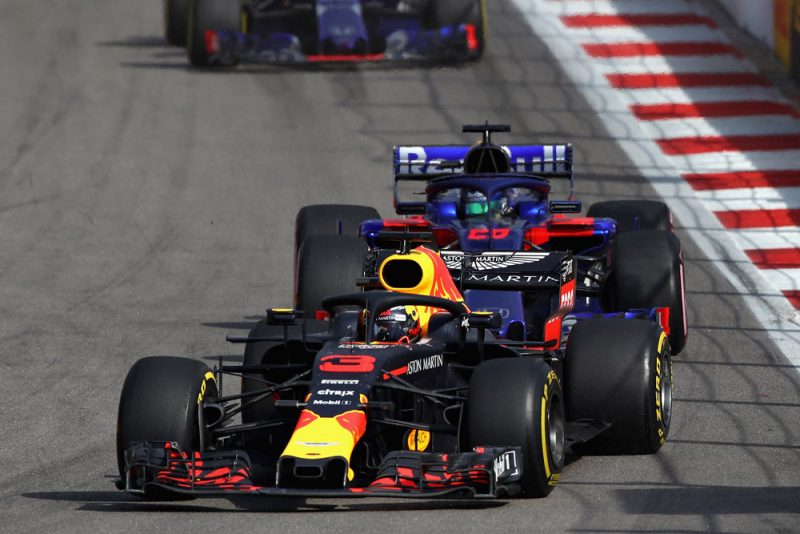 Damage sustained on the opening lap of the Formula 1 Russian Grand Prix prevented Daniel Ricciardo from charging through the field like team-mate Max Verstappen.

Then, while attempting to put a move on a McLaren later on the opening lap, the Australian struck debris and damaged his front wing.

Carrying the damage for much of the race, it saw Ricciardo unable to match the pace of his team-mate and therefore slowed his progress through the field to finish sixth at the flag.

“I guess the realistic only other position was Max’s,” he said.

“But yeah, lost out on the first lap.

“I can’t really remember what happened. Obviously I wasn’t really ahead of where I started, by Turn 10.

“Then I remember I had a slipstream from I think a McLaren, and as soon as I pulled out there was some debris in front of me and I hit that. I just didn’t have time to see it or react.

“The first lap wasn’t going that great, and then I took that and broke the front wing. That was a kind of double whammy on the first lap and that really shaped the race.”

“I think Daniel lost a piece of carbon, which went straight into my visor, so this was really, really scary,” the Toro Rosso driver said.

“I thought it was going through and straight into my eye, and finally it touched the visor and then came into the cockpit.

“In Turn 4 I had to take the carbon piece and throw it from the cockpit. At the time I had like five-tenths of a second to see it flying and just hitting the visor, maybe a winglet that came from somewhere, I think contact with Daniel. But it came my way, pointing towards me and straight in my right eye.

“When I saw it coming first I was like, ‘it’s going through the visor’. Thankfully, the visor is really strong, it hit it and fell into the cockpit.”

Contrasting Ricciardo’s early progress was the incredible early performance from Verstappen, who climbed nine places on the opening lap alone.

The Dutchman led most of the race too, owing to an alternate tyre strategy that saw him swap to the hypersoft tyres for the final 10 laps of the race.

Taking a new front wing at his stop, Ricciardo’s pace improved but by that time his fate was all but sealed as he trailed the leading five runners by some 50 seconds.

Looking to understand where he went wrong, Ricciardo admitted he’s going to review footage from the opening lap to understand whether he made mistakes which ultimately cost him in the race, or if circumstances simply conspired against him.

“I want to watch the replay just try and learn from myself and just see if I can pick up a few things or if it was just circumstances which kind of kept me not advancing. I’d like to think there’s room for improvement.”

Ricciardo continues to sit sixth in the championship with 134 points, one spot and 24 points behind Verstappen.