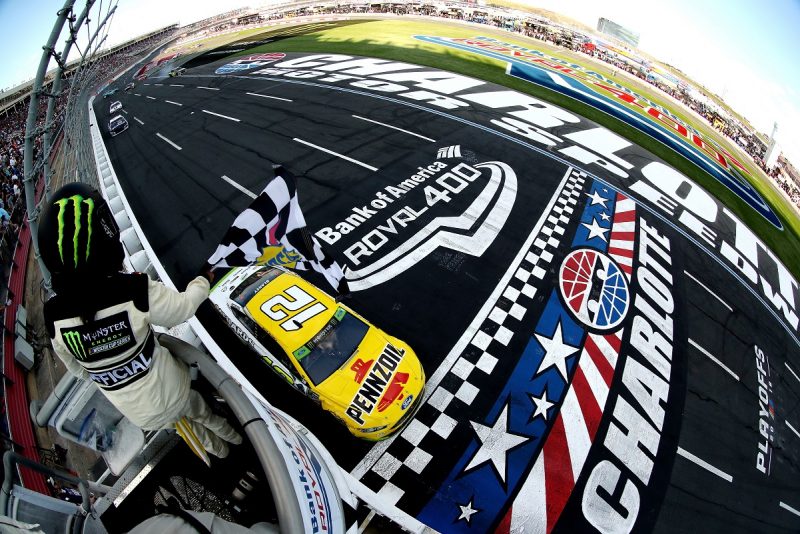 Ryan Blaney has won on the Charlotte roval after Jimmie Johnson took out leader Martin Truex Jnr in the final corners and cost himself a Round of 12 spot.

Truex Jnr led on the final lap of the Bank of America Roval 400, the first road course race in the history of the Monster Energy Cup Series Playoffs.

Johnson ran second and despite having enough points to lift himself into the all-important top 12 in the standings as they ran at the time, he continued to pressure the race leader.

However, the seven-time champion made a mess of the approach to the frontstretch chicane, at the end of the roval lap, and lost control of the #48 Hendrick Motorsports Chevrolet.

As Johnson pirouetted, he backed into Truex Jnr’s #78 Furniture Row Racing Toyota at the very last corner, clearing the path for Blaney to take a Bradbury-esque win.

To compound Johnson’s error, he had to bring his car to a complete stop due to cutting the chicane and ultimately finished eighth, leaving three points short of 12th in the points.

Truex Jnr had similarly already been taken out at the same chicane when Brad Keselowski spun near the end of Stage 2, when the defending champion was already running wide himself.

Ironically, he inherited the lead when Keselowski locked up the #2 Team Penske Ford at a restart and ran into the wall at Turn 1, the left-hander off the oval.

A pile-up ensued, resulting in a red flag and subsequent three-lap dash to the finish with Truex Jnr alongside Johnson, Chase Elliott and Jamie McMurray on the second row, and Blaney fifth.

Blaney had finished 10th in Stage 1 before winning Stage 2 due to not needing a pit stop in the second 25 laps.

He had arrived at Charlotte four points above the drop zone but the #12 Team Penske Ford was in the right place to book his place in the next phase of the season with a win.

Truex Jnr took the chequered flag in only 14th but sits third in the standings ahead of the Round of 12.

Along with Johnson, the others to drop out of series contention were Denny Hamlin (#11 Joe Gibbs Racing Toyota) in 12th, team-mate Erik Jones (#20 Toyota) in 30th, and Austin Dillon (#3 Richard Childress Racing Chevrolet) in 39th after hitting the wall.

Larson finished 25th, Keselowski 31st, and Kyle Busch 32nd, but the latter two had already won during the Round of 16 and the former also lives to fight another day in the Playoffs.

Aric Almirola sits 11th in the standings, one position ahead of Bowman, after finished 19th in the #10 Stewart-Haas Racing Ford.

The Round of 12 starts at Dover International Speedway on October 5-7 (local time).