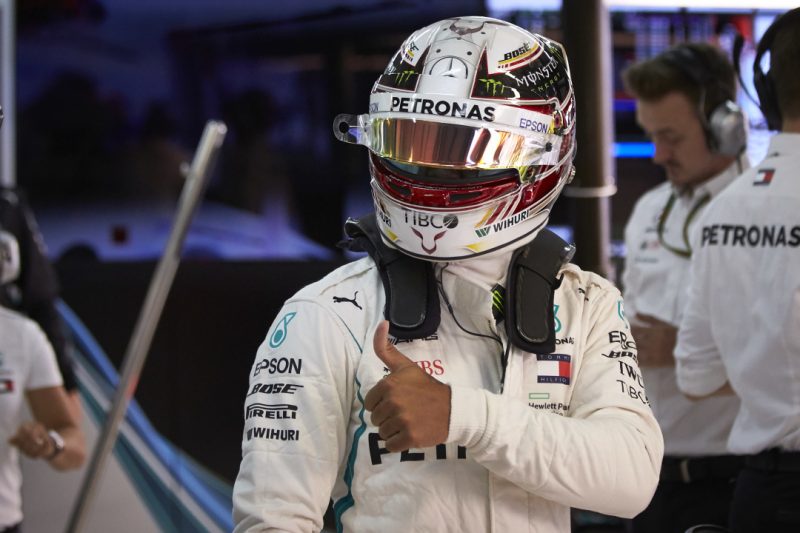 Bottas headed the race from the start and held on to an effective race lead following the pit stop cycle before being moved aside to protect Hamilton from Sebastian Vettel on Lap 26.

Hamilton had begun to suffer from blistering on his rear tyres after being forced to push hard immediately out of the pits as he battled with Vettel.

Though the opportunity allowed for Hamilton to redress the situation late in the race, the decision from the team was to leave Hamilton out front.

“It’s actually quite a difficult day because Valtteri did a fantastic job all weekend and he was a real gentleman to let me by,” said Hamilton.

“He’s not in the fight for the championship where we are.

“I can understand how difficult it was for Valtteri,” he added.

“He did a fantastic job today and deserved to win, but championship wise, as a team we’re trying to win both championships and I think today was a real team effort.”

Bottas cut a dejected figure after the race, with the team’s celebrations also muted as the drivers climbed from their cars in parc ferme.

The Finn admitted that while the team discussed various scenarios prior to the race, the decision to move him aside for Hamilton still stung.

“A difficult day. Obviously a good result for us as a team, we got maximum points, but personally as everyone saw, it’s quite difficult,” admitted Bottas.

Hamilton’s tyre dramas stemmed from being forced to push the soft compound Pirelli tyres immediately out of the pits, going wheel to wheel with Vettel as they approached Turn 2.

A lap later Hamilton launched an attack, which was aggressively defended by the Ferrari driver in an incident that almost saw the Mercedes in the wall, though the stewards deemed it warranted no action.

“For me, he did move over to the inside, and then he moved again and nearly put me in the wall. So I thought that was a double move so I guess they (the stewards) didn’t see that,” Hamilton recalled.

“Fortunately I was able to stay out the wall and still get round the corner and then it was a question of who was going to brake earlier into the next corner, and I wanted it more at the time.”

Vettel meanwhile was circumspect in his assessment, suggesting the teamwork between Bottas and Hamilton is what made the difference.

“They were very good together, and the start I had nowhere to go, no tow,” Vettel explained.

“Then I think we surprised them with a very good out lap, managed to jump Lewis, but at the same time then Valtteri was backing off and I was struggling in the last sector, lost a little bit so Lewis was close.

“Then he had a run into Turn 2, I managed to cover, then I didn’t see him through the left-hander.

“I saw that he was somewhere on the outside, but then I think he was to be fair enough, give room, even if I did want to but I had to to make sure it remains fair. Hard but fair.

“He then obviously got passed and I think everybody had more or less the same pace. I think we were better with the tyres but probably not better in terms of pace.”

Vettel ended the race third, scoring 15 points versus the 25 Hamilton scored for winning the grand prix.

It’s a result that moves the Mercedes driver 50 points clear in the drivers’ championship with five races remaining.