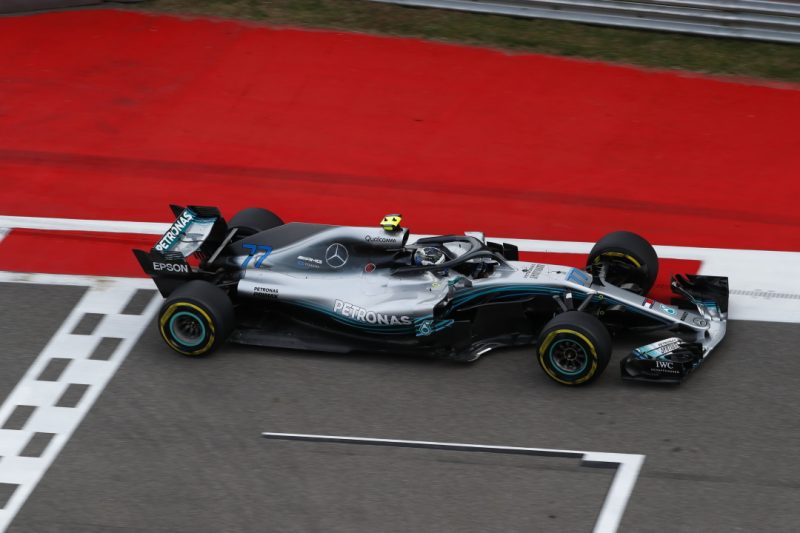 Both of Bottas’ laps in the final stage of the three-part qualifying session would have been good enough for pole position after a mistake saw Lewis Hamilton unable to improve on his second attempt.

The pair were head and shoulders clear of the chasing pack, half a second clear of Sebastian Vettel in third and eight tenths clear of Kimi Raikkonen in fourth.

Bottas had set the early running with a 1:32.7, though that was quickly eclipsed by Hamilton who went just over a tenth faster as the meaningful running began in Qualifying 2.

Facing grid penalties and set to start from the back of the grid, Toro Rosso and Red Bull both parked their cars for the session, while both Renault drivers climbed out of their cars without having set a lap, leaving every car which set a time progressing to Qualifying 3 without competition.

It meant Max Verstappen, Daniel Ricciardo, Pierre Gasly, Carlos Sainz, and Nico Hulkenberg were cut from the session without setting a lap.

Despite the lack of competition, all the leading contenders headed back out in the final moments of the session, Hamilton teasing with a lap more than half a second faster than Bottas’ provisional pole time before backing off at the final corner.

As he’d been in Qualifying 2, Bottas was again the first to set a time as the final phase began, his 1:31.528 the fastest ever seen around the Sochi circuit.

Hamilton dropped time in the middle part of his lap to end it just 0.004s off the back of the Finn.

Ferrari was unable to lift to match the Mercedes duo, the initial laps seeing Vettel 0.639s slower and Raikkonen 0.709s off Bottas’ pace.

At the second time of asking Bottas improved further, banking a 1:31.387 to confirm himself on pole as behind him on track a mistake saw Hamilton abort his lap.

The championship leader ran wide at Turn 7, though still ended the session on the front row.

A mistake from Raikkonen saw him clobber the apex kerb at the final turn to end his final flying lap 0.8s down on Bottas.

Vettel closed with his effort as the chequered flag flew to qualifying third, though more than half a second off the time needed to be in the fight for pole position.

Nobody else could get within two seconds of Bottas, with Esteban Ocon in fifth 2.026s off the pace but only 0.006s faster than sixth placed Charles Leclerc.

It was similarly close between Kevin Magnussen and Sergio Perez for seventh, the Haas driver gaining the upper hand by just 0.047s.

Romain Grosjean will start ninth with Marcus Ericsson banking a steady 1:35.196s to confirm himself in tenth for Sunday’s race.

Local favourite Sirotkin’s fate was sealed with a late spin at Turn 9 on his final flying lap, the Williams driver running wide on the exit kerb at Turn 8 before losing the car entirely as he turned into the next corner.

However, the final five on the grid will comprise of the two Red Bulls, two Toro Rossos, and Fernando Alonso courtesy of their engine changes heading into the event.

It will leave Sunday’s grid looking rather different from the order in which the field qualified, though the front of the will be unchanged with Bottas heading Hamilton from a brace of Ferraris off row two.

The Russian Grand Prix is scheduled to being at 2100 AEST on Sunday evening.