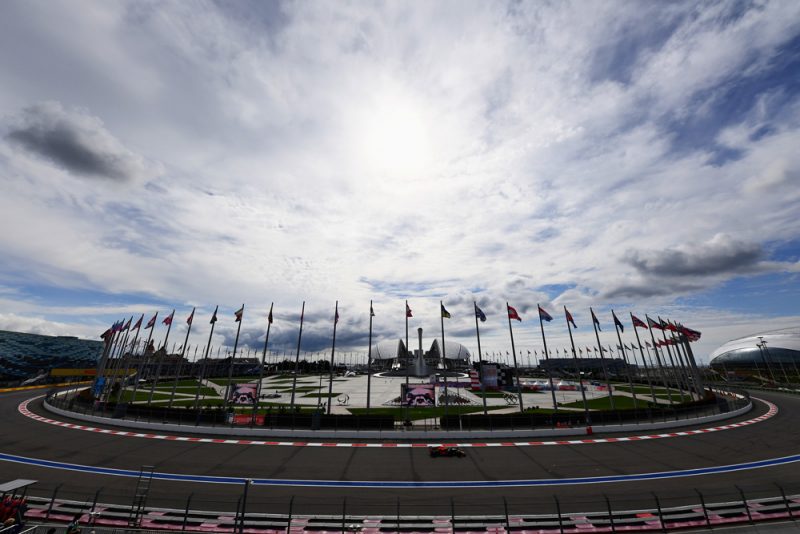 Daniel Ricciardo on track in Sochi

Lewis Hamilton went quickest on the opening day of practice in Sochi ahead of this weekend’s Formula 1 Russian Grand Prix.

The Mercedes driver headed a 1-2 for the Anglo-German squad with Valtteri Bottas two tenths off his team-leader in the day’s second session.

It was an uneventful 90 minutes, a spin from Sebastian Vettel the only untoward moment as the German ended fifth fastest.

Trailing the two Mercedes were Verstappen and Daniel Ricciardo, the lead Red Bull more than four tenths behind Hamilton, with the two Ferraris of Vettel in fifth over Kimi Raikkonen sixth.

At the other end of the timing screens it was also a Noah’s Ark formation, with both Williams propping up the time sheets with McLaren only marginally better in a field spread by more than 3.5 seconds.

Earlier, Ricciardo’s session was curtailed after his car belched smoke, the Australian banking just 11 laps in the session, the fewest of any driver.

Those times proved more than a second slower than were managed later in the day, before teams switched focus to long run performance late in Practice 2.

The opening session had been similarly uneventful with only spins from Norris and Lance Stroll livening up proceedings.

Four teams sported their test or reserve drivers in Practice 1, with Antonio Giovinazzi in at Sauber, Lando Norris at McLaren, Artem Markelov at Renault, and Nicholas Latifi for Williams.

What the sessions did provide however was evidence that the hypersoft Pirelli tyre will likely be the choice come qualifying, with a one-stop race the most probable strategic choice.

However, with a large performance delta between it and the soft compound rubber, which seems the preferred race tyre, those in the midfield may opt to gamble on Saturday afternoon with five drivers set to be sent to the rear of the grid come the race.

Both Toro Rosso and Red Bulls will be demoted, as will Fernando Alonso, for taking on new engine components.

It could see drivers inside the top 10 come Sunday’s race starting on the preferred race rubber, while those around them will need to cede track position early to switch their tyres.

Practice continues on Saturday with the third session scheduled to begin at 1900 AEST ahead of qualifying at 2200.