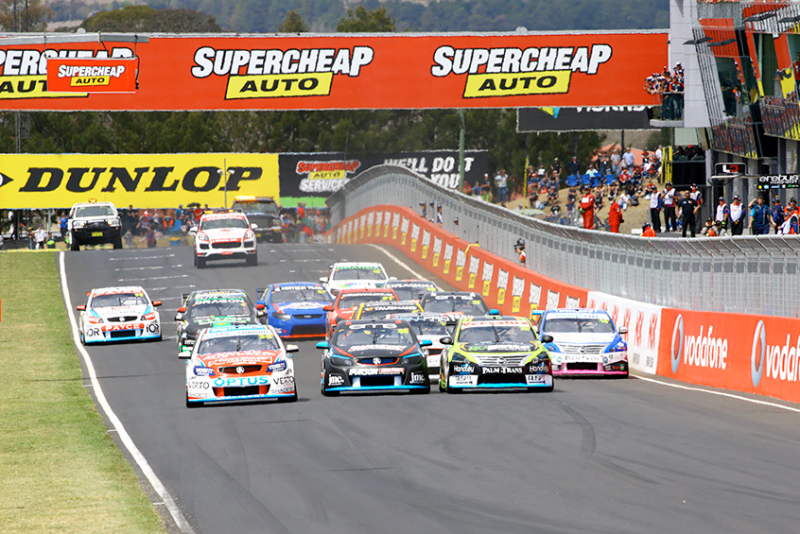 The start of last year’s Super2 enduro at Bathurst

The Dunlop Super2 Series will feature 22 cars for its 250km enduro at Mount Panorama.

Only the Grove Racing entry will be raced by multiple drivers as rookie Brenton Grove is joined by Triple Eight Pirtek Enduro Cup co-driver Earl Bamber.

The sole omission from the field which took to Sandown International Motor Raceway for Round 5 is Kali Motorsport, as announced on Supercars’ official website.

Kali fielded Ricky Capo at the Melbourne circuit after a late call-up, but Gerard McLeod had indicated to Speedcafe.com that the team was not a certainty at Bathurst due to the additional cost of running in Super2’s longest race of the season.

The field is therefore one down on its usual size, but up on the 15 which ran on the Supercheap Auto Bathurst 1000 support card last year when the race did not count for Super2 Series points.

Super2 has contested a single 250km race at Bathurst since 2014, the first three of which were won by Paul Dumbrell before Macauley Jones took out last year’s.

They are among nine Bathurst 1000 co-drivers in the field.

The 41-lapper has again been scheduled for Saturday afternoon, after Super2 kicks off its weekend with the first of two 40-minute practice sessions on Thursday at 0845 local time/AEST.

Dumbrell currently leads the series by 226 points from Chris Pither.