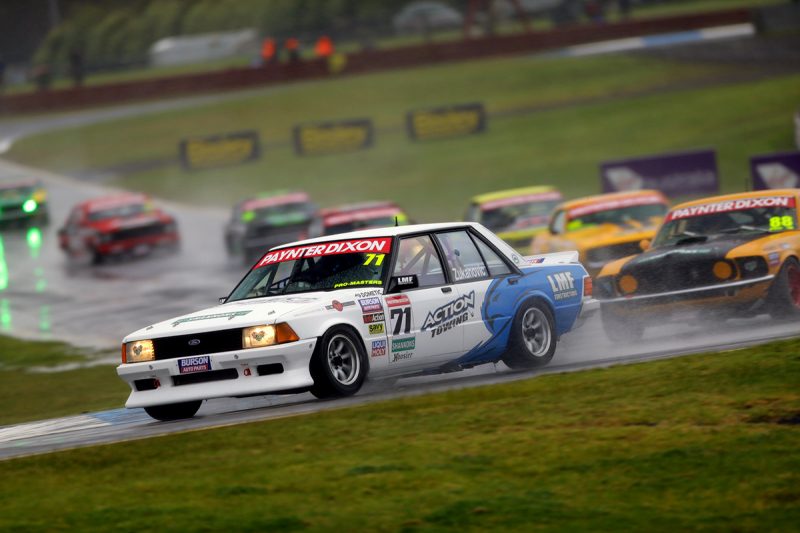 Repairs have been completed on Marcus Zukanovic’s Touring Car Masters Ford XD Falcon in time for Bathurst following a hefty crash at Sandown.

The Ford missed Sunday’s final race of the Sandown round after Marcus Zukanovic went off at the back straight and found the fence in its first weekend of racing.

While there is a relatively short turnaround between Sandown and Bathurst, Zukanovic says that the car has already been fixed, but for the addition of some panels, after it was found that damage was fairly minor.

“It’s all repaired,” he confirmed to Speedcafe.com.

“It wasn’t too bad at all. It was pretty much just a headlight panel and a skirt section and a repair on the rails, so it’s all repaired and engine bay is all painted.

“We’re actually assembling it now, getting it ready obviously for next weekend.” 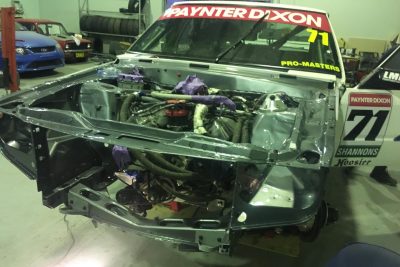 The XD under repair

The Action Racing XD only hit the track for the first time in the week before arriving at Sandown, meaning that Zukanovic was learning on the run.

He says that having a round in the car under his belt will be a boon for Mount Panorama.

“The start of the weekend at Sandown was a little slow and just got progressively better as we got more time in the car and more laps,” explained Zukanovic.

“It’s just a shame Sandown ended the way it did but these things happen, it is motorsport, so we’ll just regroup and put it down to a big learning curve.

“It’s no longer a new car any more, it’s got the new car jitters out of it, so we’ll be fine, it’ll be good. Looking forward to Bathurst.”

While the 2006 V8 Ute Racing Series winner was not sure of the cause at the time of the crash, he believes that his and the team’s lack of experience with the car was the case of the accident.

“It was cold tyres, probably a couple of set-up changes weren’t right… just all of it,” said Zukanovic.

“A big piece of it is me still learning and understanding those cars, and it was just a knife edge decision there and unfortunately it was at Turn 6 (where there is minimal run-off).

“The fact that the Old Man’s (Mick) built it quite strong and tough and all the rest of it is cool; it didn’t sustain that much damage.”

That the car escaped Sandown relatively unscathed means that there has been minimal delay to the build of a second XD Falcon for a yet to be named driver, a project which Marcus Zukanovic says is “cruising along.”

Work is also still ongoing at Team Johnson, which initiated the moves to bring the XD into Touring Car Masters, on its own XD for Steven Johnson to race next year.

There could be as many as four XD Falcons on-track next year with the Gambold family, which debuted its partially converted example at Sandown, considering entering multiple rounds in 2019.

Round 7 of this year’s series begins with one practice session and qualifying on Thursday next week at the Supercheap Auto Bathurst 1000.