Kim Jane, winner of the last ever V8 Ute Racing Series, will make his first starts in the ECB SuperUtes Series at Bathurst and the Gold Coast.

Jane will drive the Wil-Tow Isuzu D-Max in place of car owner Steve Wilson, who will be absent due to business and family commitments.

The rounds will be the veteran’s first in a race car since he clinched the V8 Utes series at his 15th and final opportunity on the streets of Newcastle last November.

“I caught up with Steve at Winton earlier in the year (during the Supercars and SuperUtes round) and he sort of threw it at me and I said tongue in cheek, ‘Just give us a call when you know what you want to do,’ Jane told Speedcafe.com.

“Then he contacted me again because he’s that flatout at work, he can’t afford the time off with his business, so he’s asked me if I could do both rounds.

“I thought, ‘You never knock back the opportunity to drive at Bathurst,’ so I’m running the Isuzu at Bathurst and at Gold Coast.” 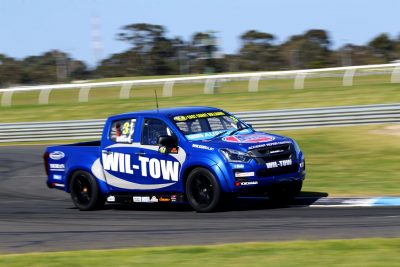 Jane had been trying to put together a SuperUtes campaign for 2018 but came up short on funding and had opted to sit out the year entirely until getting the call-up from Wilson.

“When I couldn’t put anything together late last year, I stopped worrying about it,” he explained.

“I’ve changed jobs and I’ve sort of been concentrating on that, having a break from it after 33 years.”

While the veteran of V8 Utes and former AUSCAR racer had tested a SuperUte during the development phase of the category last year, he will arrive at Mount Panorama relatively green.

“Only at Morris’ (Norwell Motorplex) in the original ones,” he said of his SuperUtes experience.

“Outside of that, no testing; just get in it and go, see how we go.”

Jane will not be the only new face in the SuperUtes field at the Supercheap Auto Bathurst 1000 event.

Charlotte Poynting is pencilled in for her debut in an additional Western Sydney Motorsport entry, pending completion of the new Toyota Hilux by Sieders Racing Team, while Chelsea Angelo has been locked in for her first start in the series’ second Ford Ranger out of the Ranger Racing stable.

The SuperUtes will hit Mount Panorama for the first time for two 20-minute practice sessions on Thursday, October 4.