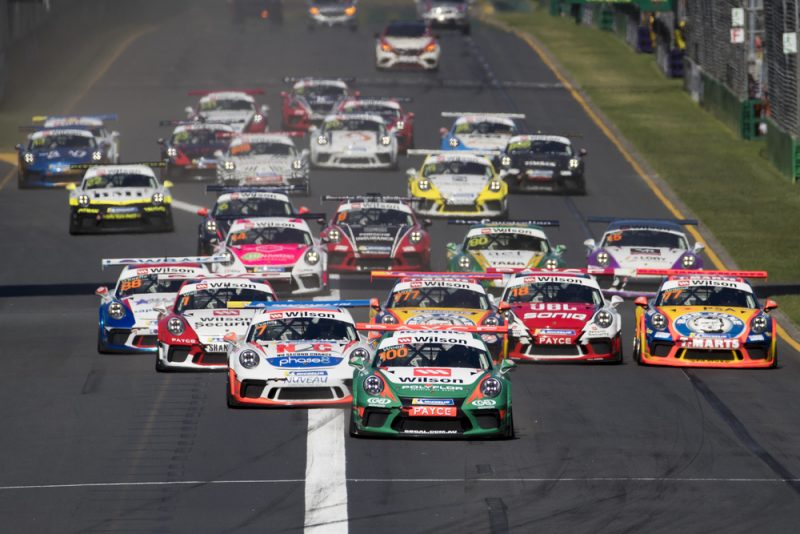 The Carrera Cup field is set to expand

The Porsche Wilson Security Carrera Cup field is set to expand with the arrival of six more cars in Australia, one of which will debut at Bathurst.

The new cars make for a total of 32 current-specification 911 GT3 Cup (Type 991.2) vehicles, with five of the latest bunch already sold.

All 26 of the original dispatch were entered in the first two rounds of the 2018 season, which has seen an average of 24 cars per round so far.

That allocation was in fact sold before the end of October last year ahead of its local debut at Adelaide in March, with the cars eligible for Carrera Cup until the end of 2021.

“We look forward to welcoming more drivers to Carrera Cup in the near future, starting from next weekend’s Bathurst round.

“While we couldn’t accommodate all Carrera Cup hopefuls who expressed genuine interest at the start of the 2018 season, this new injection of 911 GT3 Cup cars to the market allows us to welcome more participants to our series for what will be a thrilling conclusion to 2018 and, from all indications, another strong season in 2019.”

Dave Stevens will pilot one of the new cars in the final two rounds of this year, at the Supercheap Auto Bathurst 1000 and Vodafone Gold Coast 600, ahead of a full season in 2019.

He also raced in Nations Cup for a number of years before a long period away from motorsport.

“I’ve long admired Carrera Cup as a category however my career took me to open wheelers and GT racing in the past, so I’m delighted to have a crack for the remainder of this season and 2019 also,” said Stevens.

“During the 10 years off I revisited my cycle racing career; I was a young pro rider in Melbourne and felt I had unfinished business with the sport and managed to win four masters world titles and set two world records too.

“But now it’s back to motor racing as I feel there is unfinished business here too.”

Stevens’ Wall Racing-run entry will race in the Tag Heuer Pro-Am class with backing from long-time supporters Brennan IT and Superfluid.

Carrera Cup’s penultimate round begins with a 50-minute practice session and 30-minute qualifying session on Thursday, October 4 at Mount Panorama.