Miller: Ninth at Aragon ‘something to build on’

Miller: Ninth at Aragon ‘something to build on’ 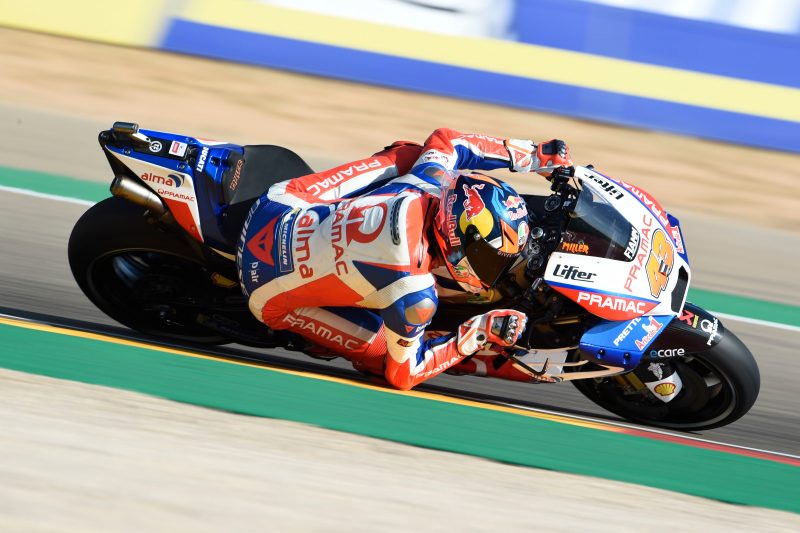 Jack Miller is looking at the positives of his ninth position finish in the Aragon MotoGP, his best result in eight races.

The Australian was 11th after being delayed on the opening lap by Jorge Lorenzo’s highside before running in eighth for most of the 23-lap race.

He gave the position up to Valentino Rossi late in the piece, due to heavy tyre wear and a mystery vibration in his Pramac Ducati.

However, Miller was still satisfied with his efforts after a frustrating period highlighted by an early crash a fortnight earlier in Misano.

“Ninth at Aragon doesn’t sound like a lot but considering how things have been for me lately, it’s pretty good,” he explained in his Red Bull column.

“I’m not overly impressed, but it’ll do.

“It’s been a long while since I’ve scored that many points – Le Mans back when I came fourth if you can believe that – and I was only 16 seconds off the win and had my best-ever finish at Aragon, so that’s something.

“Also, that was no easy race with how hot it was here. I just couldn’t seem to get the life out of the (hard) tyre at all today.

“I was eighth and starting to crawl back towards my team-mate (Danilo) Petrucci with seven or eight laps to go, and then I had this feeling like the bike had jumped out of gear or something, because I had this huge vibration.

“I thought I’d delaminated the rear tyre on the left-hand side, so that was a bit of a panic because I thought I was probably going to have to retire or crash.

“When that vibration came, I immediately dropped my pace back half a second or more into the 1 minute 50s which left me exposed to Valentino coming up from ninth, and he got me with less than two laps to go.

“The last four laps, I had to roll off and basically nurse it home because I had zero tyre left.”

While the cause of the vibration has not been determined, Miller is upbeat about his own performance after two non-points finishes and the washout at Silverstone.

“I just needed to get some points going again, and these ones have been a while coming,” he continued.

“I was fast at Silverstone and then we didn’t race with the weather, and then Misano was going pretty well until I screwed up and dropped it on the third lap.

“I got there eventually, so hopefully this is something to build on.”

Miller moved up one position to 12th in the championship at Aragon.

Round 15 is the Thailand Grand Prix on October 5-7.