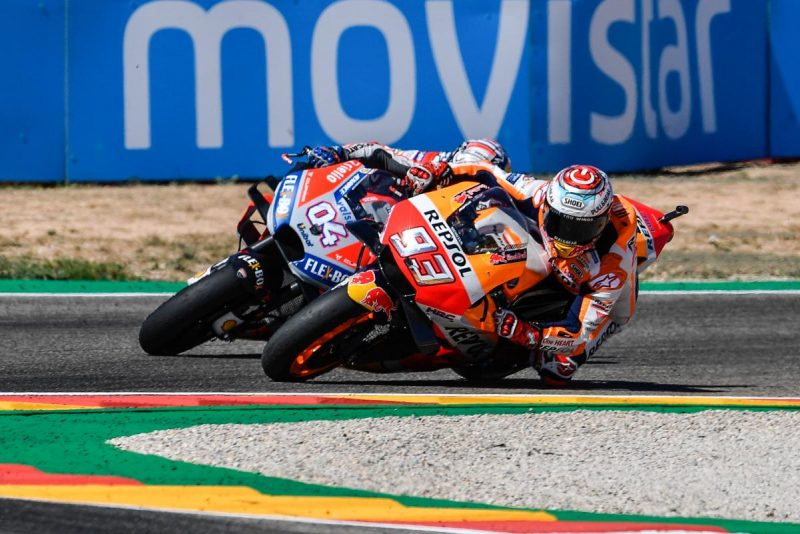 Marc Marquez has extended his MotoGP championship lead with a well-earned victory over Andrea Dovizioso in Aragon while Jorge Lorenzo crashed at the very first corner.

The battle between Marquez and Dovizioso was at times a race in three when they took time off each other and allowed Andrea Iannone to catch up.

Disaster struck pole-sitter Lorenzo at the start of the race when he got a poor launch then ran wide at Turn 1 and highsided his factory Ducati.

Marquez jumped into the lead from third on the grid but held that for only a handful of corners before Dovizioso took over.

Most of the early action concerned the factory Suzukis as Iannone moved from fifth on the grid to third and Alex Rins all the way from ninth to fourth on the standing lap.

They swapped positions multiple times and Dani Pedrosa briefly demoted Iannone to fifth on Lap 5, but the second Repsol Honda would lose touch with the top four.

The Spaniard started his run at the leader and lunged past Dovizioso at Turn 12 on Lap 14, the same lap on which Iannone re-passed Rins.

On Lap 16, the lead switched three times before they got to the Reverse Corkscrew, allowing Iannone to come from nearly two seconds in arrears to practically nothing behind.

Marquez had another dive at Turn 12 on Lap 19 and when Dovizioso responded he forced #93 wide, allowing himself and Iannone to pull up either side of the Honda as they entered the back straight.

While Dovizioso took back top spot, Marquez at least staved off Iannone to allow himself an (unsuccessful) attempt to reclaim the lead on Lap 20.

The final lead change came on Lap 21, when Marquez got up the inside at Turn 1, lost the position at Turn 4, and snatched it back at Turn 5.

Dovizioso is now trails the Spaniard by the equivalent of almost three races (72 points) in the championship as a result of his second placing.

Iannone fell away again in the last couple of laps but still made the rostrum for the first time since Round 4, while Rins finished fourth for the second race in succession.

Pedrosa ended up a lonely fifth, his equal best result of the season, and Aleix Espargaro got an absolute best of 2018 for he and Gresini Aprilia in sixth.

Danilo Petrucci was seventh aboard his Pramac Ducati, two positions ahead of team-mate Jack Miller on a year-old version.

Miller spent most of the race in eighth position but was overtaken by Valentino Rossi at the start of Lap 22 as ‘The Doctor’ climbed from 17th on the grid to eighth, the bulk of those positions coming in the first two laps.

Rossi’s Movistar Yamaha team-mate Maverick Viñales, who started from 14th after a three-position grid penalty, dropped even further to 19th on the opening lap before riding back to 10th at the chequered flag.

In addition to Lorenzo, who sustained a dislocated first toe on his right foot, Alvaro Bautista (Nieto Ducati) and Cal Crutchlow (LCR Honda) were retirements.

Both went down early while running towards the back of the top 10.

The championship now moves to its Asia/Australia flyaway phase, starting with the first Thailand MotoGP at Buriram on October 5-7.