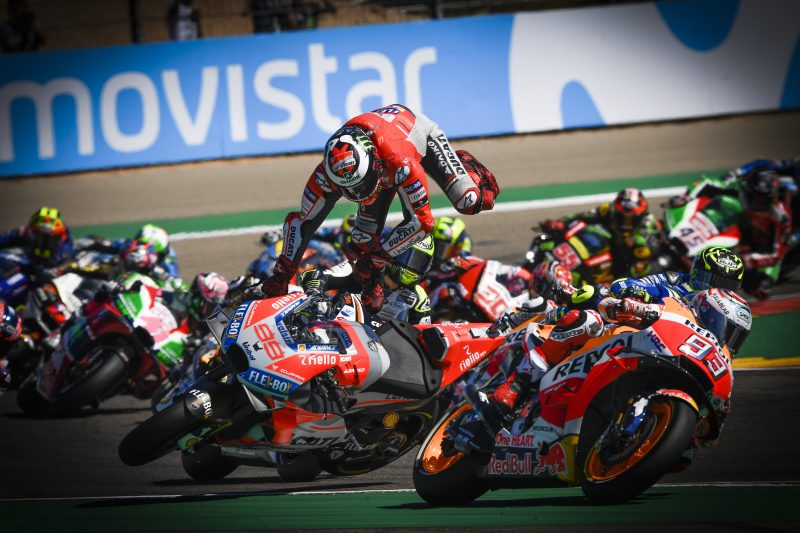 Jorge Lorenzo claims that future team-mate Marc Marquez “destroyed my race” after highsiding out of the Aragon MotoGP at the first corner.

Marquez made a strong start from third on the grid and outbraked pole-sitter Lorenzo into Turn 1.

The manoeuvre caused the Repsol Honda to run wide, allowing Andrea Dovizioso to pass, while Lorenzo lost control and was thrown from his factory Ducati.

He is now in doubt for the first ever Thailand round in a fortnight.

Lorenzo believes that the incident was the result of Marquez, who he will join at the factory Honda squad in 2019, coming too deep into the first corner.

“From the outside, (it looked like) I entered too fast, I lean too much and I entered too wide in the dirty part, that’s why I crashed,” explained Lorenzo.

“From what I lived, what I experienced, I entered in the normal line, entered the corner as I did in the seven last years here in Aragon, but I watched Marc go into the inside, very aggressive, not making the corner because you saw where he finished, in the green (painted run-off area).

“And when he saw that I was there, he tried not to let me pass into the corner, and I didn’t have any options (but) to go to the dirty part.

“Because we were very wide and already the other riders were coming, if I didn’t want to lose five or six positions, I had to open the throttle.

“In Misano (preceding race), the crash was completely my fault. This time, Marc destroyed my race, destroyed my foot, destroyed also the big possibility that I have to win and probably also (the) Thailand race.”

See what the Ducati man had to say about his turn one crash 🎙 https://t.co/ml6yGcf5SR pic.twitter.com/avjNO6Tynq

Marquez did not comment directly on Lorenzo’s off but indicated that he was not to blame.

The championship leader compared it to a battle with the other Ducati Team rider who he fought off to take victory, Dovizioso.

“I haven’t seen the crash, and didn’t see the (pit) board saying ‘Lorenzo out’.

“In the first turn I came in quite fast and sliding, I went wide, it was very similar to another moment with Dovizioso where we touched, and I went on the green.

“That’s the danger of this track. If you go on the dirty part of the track, it’s easy to crash.

“It’s a racing incident, but when you go on to the dirty part of the track amid all the adrenaline of the start, you have to be calm not open the throttle (too early).”

Lorenzo was diagnosed with a fractured metatarsal and dislocated big toe in his right foot and says doctors have estimated a recovery time of 10 days.

The outgoing Ducati rider was third in the championship, a point ahead of Dovizioso and 71 behind Marquez, after winning in Austria in mid-August.

Despite qualifying on pole for all three races since, he is now 44 points behind Dovizioso and 116 back from Marquez in fourth, after a washout in Britain and two crashes.