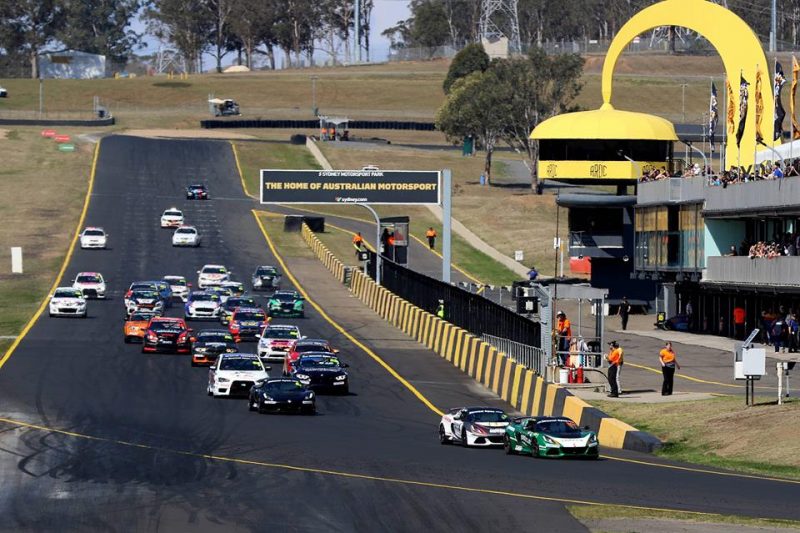 Grant Denyer and Tony D’Alberto have extended their winning streak in the #10 Simply Sports Cars Lotus Exige in the Sydney Four Hour.

They took a fourth victory in a row, this time at Sydney Motorsport Park in the headline race of the Shannons Nationals meeting, by nearly a lap.

Ryan Simpson and Jim Pollicina again finished second in the latter’s own #7 Lotus Exige, ahead of the #1 BMW M4 of Grant Sherrin and Iain Sherrin.

D’Alberto swept into the lead from the outside of the front row as the race started under warm sunshine but pole-sitter Simpson went back down the inside at Turn 2.

Simpson led by around 7.5s when he pitted in the 85th minute and handed over to Pollicina.

D’Alberto waited another 10 laps before filing into the lane and Denyer entered the circuit with an advantage of more than 20 seconds.

Pollicina completed his stint with nearly three hours on the clock, by which time he was around a minute-and-a-half back from the leader and Car #7 dropped two laps down but stayed second.

It looked like Car #10 had caught a break when the first Safety Car came minutes later as Jason Miller pulled off with a drama for the #20 Mitsubishi Lancer Evo X.

However, it actually trapped Denyer in the car as D’Alberto would have exceeded maximum driver time had he got in for the run to the finish.

Denyer restarted with a lead of nearly two laps over Simpson and 50 minutes in the race remaining.

However, he was back into the pits just over 10 minutes later for the sole purpose of a driver change and D’Alberto took over with slightly more than a lap in hand.

Any hopes which Simpson had were dashed when Class C leader Blake Aubin (#17 Renault Megane RS265) stopped on the road with 20 minutes remaining, drawing the Safety Car just as Simpson had caught D’Alberto on the road.

Simpson did get his lap back after the restart but finished 93s adrift.

The only A2 entrant, Chris Lillis/Nathan Callaghan (HSV VE GTS) was the last classified finisher in 19th.

While Sydney was the last round of 2018 for Shannons Nationals, the APC series will be decided at a standalone six-hour race at Phillip Island on the weekend of November 2-4. 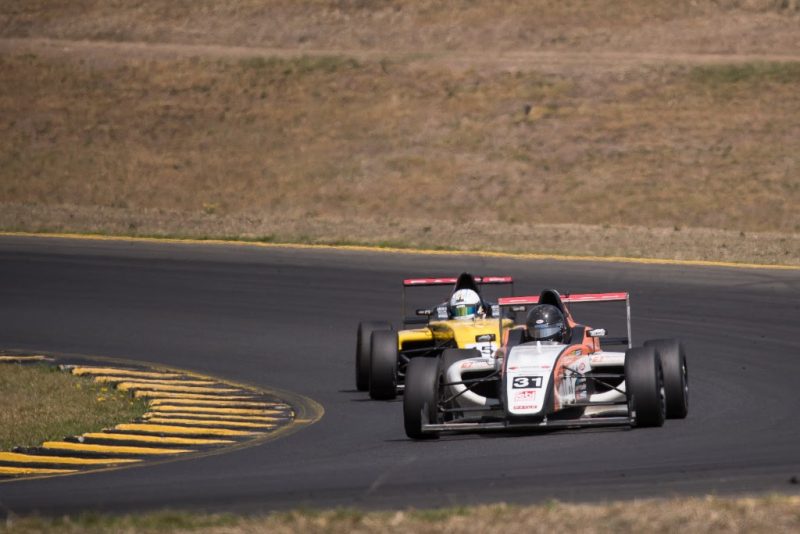 Jayden Ojeda has swept the penultimate round of the 2018 CAMS Payce Australian Formula 4 Championship and extended his points lead to 51 over AGI Sport team-mate Ryan Suhle.

Ojeda survived two nervous moments in the first two laps of Race 2 when he stepped over the edge of the track while rounding Corporate Hill.

He caught both of those slides and avoided Suhle just in front, who also got into the dirt on Lap 1 and spun down the hill.

He took a comfortable victory in Race 3 despite an early Safety Car, ahead of Suhle and Love.

Ojeda is now in the box seat to win the championship and a Toyota Racing Series test when the season wraps up at the ITM Auckland SuperSprint on November 2-4. 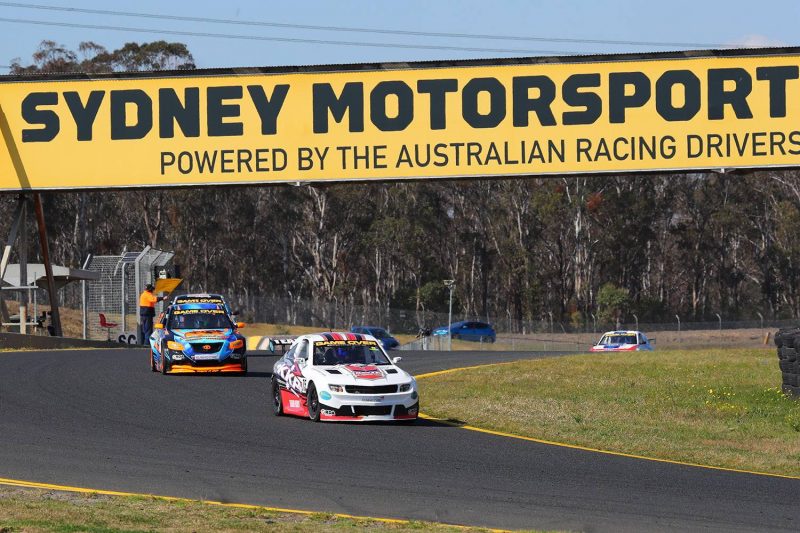 Kel Treseder has gone four from four in in Round 6 of Aussie Racing Cars.

Starting Race 3 from midfield due to the top 10 reverse, Treseder quickly moved to third before slipstreaming past Reece Chapman at the start of Lap 4.

He got under Joel Heinrich at Bond Bend (Turn 2) two laps later and wasn’t headed thereafter.

Heinrich finished second in both Races 3 and 4, slipstreaming past Kyle Ensbey at the very end of the latter.

The series top three of Ensbey, Heinrich, and Treseder finished in reverse order for the round, tightening up the margins at the top of the standings ahead of the final round at the Vodafone Gold Coast 600 (October 19-21). 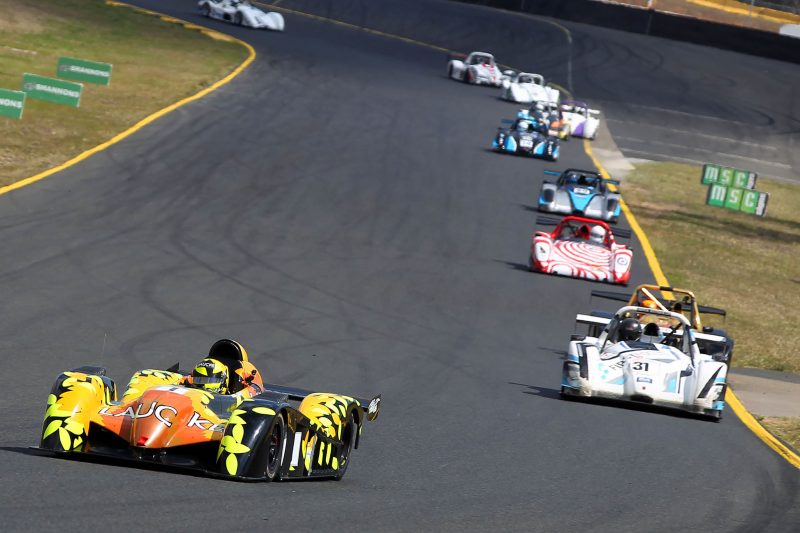 Mark Laucke (West WX10) has won Round 4 of the Australian Prototype Series having finished second in Race 2 after an electrical problem hamstrung then-leader Jason Makris.

Makris was leading by three seconds on Lap 10 of 18 when his Wolf GB08CN slowed and he retreated to pit lane.

Laucke’s lead lasted just over a lap as Paddon dived past at Turn 6 and went on to win by 5.21s.

Paul Braico (Radical SR3) was classified third after John-Paul Drake (Wolf GB08CN), who crossed the finish line ahead, had five seconds added to his race time due to a start infringement.

Makris salvaged 11th on the day but still leads Laucke by 65 points ahead of the final round in support of APC at Phillip Island.

Kim Burke has won the 2018 Radical Australia Cup after finishing fifth in the final race of the season.

They made their compulsory pit stops together and resumed in the same order before Perini pulled off with an apparent rear-end failure, drawing a Safety Car.

Paddon resumed the lead once Mitchell Neilson made his CPS and handed over to Brad Neilson just after the restart, before a second Safety Car when Tony Haggarty spun and couldn’t refire.

Burke had a nervous moment during that yellow when he was in the middle of a bizarre nose-to-tail crash involving Michael Whiting and Neilson, caused when they stopped behind the suddenly stationary Simon Haggarty.

However, he pressed on to take the chequered flag, which was all he needed to do to secure the series.

Paddon won the race from John Beck and Peter Clare.

Michael Musumeci finished second and then third, while Frank Carigliano was the runner-up in Race 3 after coming fourth in Race 2.

Alfio Musumeci was third and fourth in the two races.