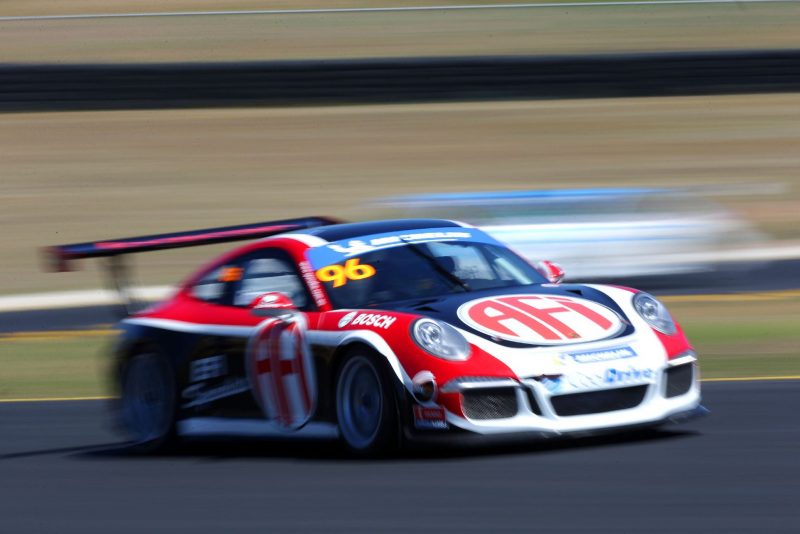 The 2018 Porsche Michelin GT3 Cup Challenge has been decided in dramatic circumstances as previous series leader Cooper Murray stalled and was cleaned up in the season finale.

The crash and subsequent restart meant that Simon Fallon took over the points lead when it mattered most, in the Sydney Motorsport Park Shannons Nationals meeting.

Murray had extended his lead over Simon Fallon by finishing one position ahead, in second, in Race 1 earlier in the day and took a 17-point lead into the final race of the round and season.

However, he stalled when the lights went out and was shunted by Shane Barwood, who also made side-to-side contact with Sergio Pires as they attempted to avoid the stricken Ashley Seward Motorsport entry.

The race was immediately red flagged with Murray’s and Barwood’s wrecks sitting on the side of Brabham Straight, while Pires drove back to pit lane.

Murray exited his car of his own accord while Barwood had to wait for the driver’s door to be pried open by recovery crews.

The Victorian took two steps to a stretcher before being conveyed to the medical centre by an ambulance.

A spokesperson for Porsche Michelin GT3 Cup Challenge has advised that Barwood “was taken to the circuit medical centre and thereafter taken to hospital for precautionary scans.”

When the race restarted, Jimmy Vernon doubled his tally with an all-the-way win over Sonic Motor Racing team-mates Max Vidau and Fallon.

Vernon had achieved his maiden victory in Race 1, when he got the jump from the outside of the front row and was not headed. The Western Sydney local led the field away after AGI Sport team-mate Ryan Suhle bogged down on Castrol Pole Position and plummeted to the back of the 10-car field.

Ojeda’s lead grew to in excess of four seconds before he buttoned off and took a comfortable victory in the 11-lap race ahead of Aaron Love (Team BRM).

Suhle salvaged third position, less than four seconds behind the winner in the end.

There will be two more 11-lap races to wrap up the penultimate round of the season tomorrow. 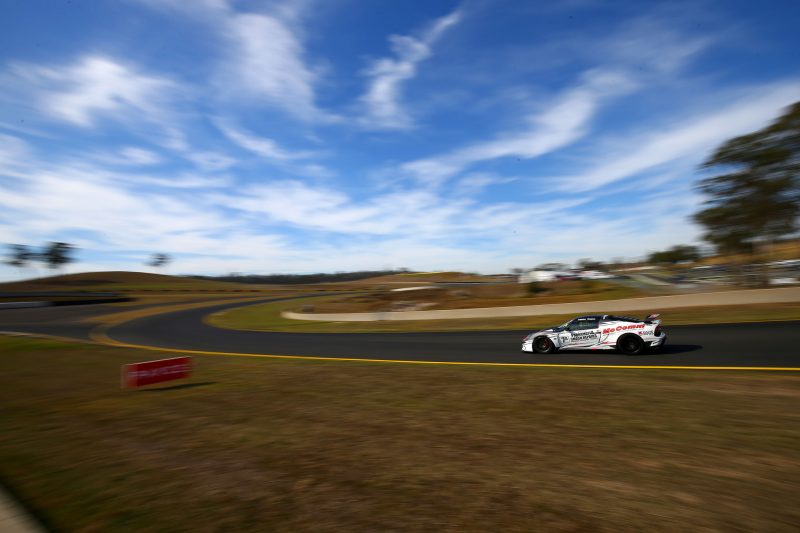 A pair of Lotuses will start from the front row for tomorrow afternoon’s Sydney Four Hour after Ryan Simpson qualified fastest and Tony D’Alberto second-fastest in Australian Production Cars.

Simpson clocked a 1:38.5403s in the #7 MoComm Motorsport Communications Exige which he will share with Jim Pollicina.

D’Alberto was 1.1510s off the pace in the similar #10 Simply Sports Cars example which will be co-driven by Grant Denyer. Kel Treseder has taken both race wins in Round 6 of Aussie Racing Cars, outgunning Justin Ruggier on each occasion.

In Race 1, Treseder’s KKP Motorsport broke into wheelspin when the lights went out and he dropped from pole position to third.

He slipstreamed past the Western Sydney Motorsport entries of Blake Sciberras at the start of Lap 2 and Ruggier three laps later.

Ruggier made a dive a Turn 4 on the final lap but couldn’t pull off the move, while Sciberras finished third.

Race 2 saw Ruggier head the field out of the opening corners only to give up the lead to Treseder as they crossed the line to complete Lap 1.

He regained the spot four corners later but Treseder powered past again at the start of Lap 4.

Ruggier then appeared to lose power on Lap 5, dropping a bunch of spots but managing to ultimately finish seventh.

Treseder greeted the chequered flag first, ahead of Josh Anderson and Joel Heinrich. Mark Laucke (West WX10) has notched up his first win of 2018 despite not crossing the line first in Race 1 for the Australian Prototype Series.

Laucke was involved in a four-way battle for the lead also involving John-Paul Drake (Wolf GB08CN), Jason Makris (Wolf GB08CN), and Peter Paddon (Radical SR3), after a standing start was employed to commence the race.

Drake shook off team-mate Makris, who was passed by Laucke on Lap 10 of 12, and took the chequered flag in first position on the road.

However, a five-second penalty for start line infringement put him back to third, behind Laucke and Makris.

Round 4 concludes with an 18-lapper tomorrow, which features the standard rolling start.

Perini led from the start but emerged second to Paddon after the pit stop cycle, before making the pass on the third-last lap.

He went on to win by an even two seconds, while Brad Neilson/Mitchell Neilson were a distant third.

The season concludes with another 50-minute race tomorrow.

Michael Musumeci took victory over Frank Carigliano by less than a tenth of a second in the day’s Veloce Alfa Romeo Race.

There will be two more eight-lap races tomorrow.