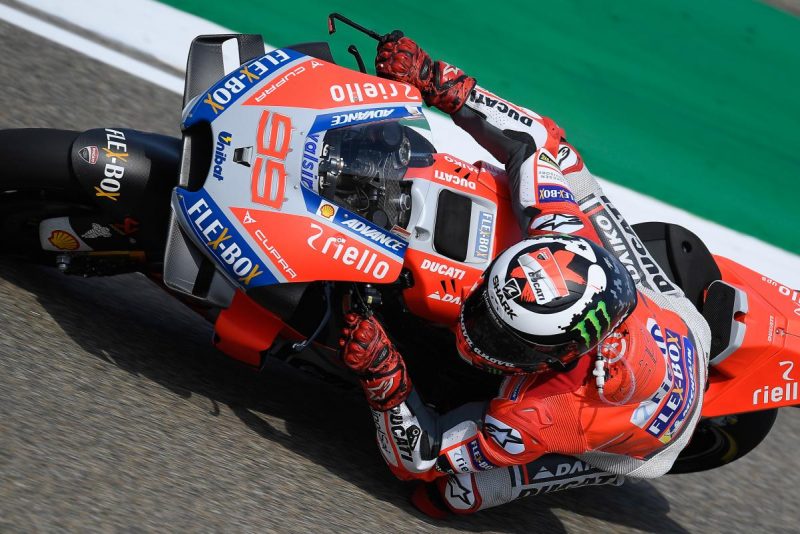 Jorge Lorenzo has snatched pole for the Aragon MotoGP while Valentino Rossi languishes in 18th on the grid.

The front row features this year’s three heavyweights in Lorenzo, Andrea Dovizioso, and Marc Marquez, all of whom provisionally held pole at some stage after the chequered flag.

Marquez was on top when the clock hit zero on the session thanks to the 1:46.960s set during the Repsol Honda rider’s first run.

When first runs were done, Lorenzo was second and Dovizioso fourth as Cal Crutchlow split the Ducati Team duo.

After a game of cat and mouse between Marquez and Dovizioso at the start of their respective second runs, the latter was the leader of the two on the road as they went for their next flyers right at the death.

While Dovizioso cleared the slow-moving Alvaro Bautista into Turn 12, Marquez ran wide as he may possibly have been baulked by the Nieto Ducati.

Dovizioso went on to usurp Marquez’s lap, only to be pipped moments later by Lorenzo by 0.014s.

Crutchlow did enough to qualify fourth despite crashing his LCR Honda at the end of the session, and will line up alongside Andrea Iannone (Suzuki Ecstar) and Dani Pedrosa (Repsol Honda).

Jack Miller (Pramac Ducati) rounds out the top 10, ahead of the two riders who progressed from Q1, Maverick Viñales (Movistar Yamaha) and Takaaki Nakagami (LCR Honda).

Rossi, on the other hand, is all the way down in 18th as the Movistar Yamaha team continued to battle.

The Italian seemed to wait for clear track until it was too late to set a competitive lap time.

Pol Espargaro, meanwhile, is out injured again after crashing and re-fracturing his left collarbone during Free Practice 3.

It was just the second race weekend back for the Red Bull KTM rider.