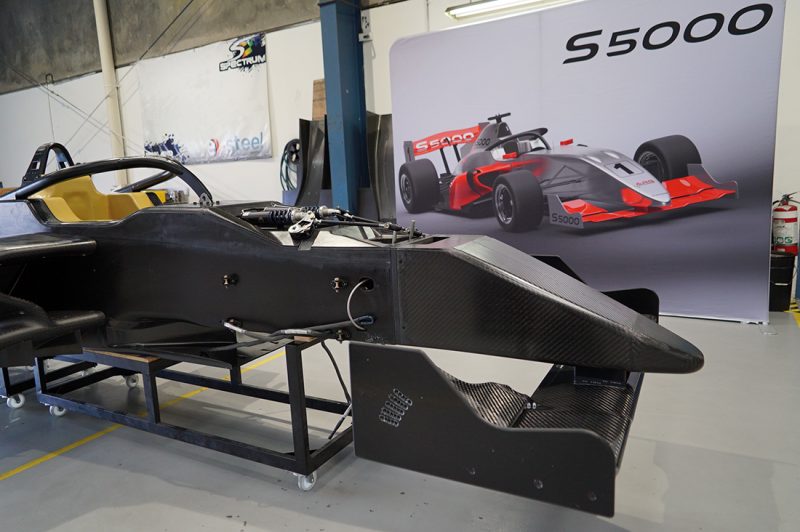 Interest among potential car owners is growing in the S5000 after the first example of the series’ controlled chassis arrived in Australia.

After a somewhat turbulent gestation period, the series has taken delivery on a Onroak-Ligier developed chassis, which is designed in France, made in Italy before being adapted for the Australian series in the USA.

Set to cost in the region of $300,000, the car will sport a crate eight-cylinder engine and a halo as it complies to the latest FIA safety standards.

The first such example was shown to selected media, including Speedcafe.com, over the course of the Rabble.Club Sandown 500 weekend.

It was an event designed primarily to attract interest, with category manager Chris Lambden enthused by the response to car received.

“You can show people photos and you can talk about stuff until you’re blue in the face, but until they actually come and see it in the flesh, that makes a massive difference,” Lambden told Speedcafe.com.

“We’ve had some very interested people come in and have a look.

“We just put out to the world that this was one and I think we’ve got a growing list of actually very serious and what I would call really desirable car owners coming together,” he added.

“Very encouraged, but we need more at this stage. The more the merrier. We’ve got a list going now and our hope is to be able to complete a batch of 16 cars to kick off the series.”

Lambden hopes the category will attract both aspiring drivers on the way up, and those at the other end of their careers, with the new car tempting back individuals who’d stepped away from motorsport in recent years.

“There are some people who have probably stepped back from the sport for quite a while, since there hasn’t been a big open wheel category here, and some of them are coming back out of the bushes.

“Some of them are in the shape of people who want to be a car owner and make it available for a good young driver and that kind of thing.

“We’ve got some good young guys looking to step up from the likes of Formula Ford and Formula 4 and we’ve got some more established guys,” he elaborated.

“There’s some very good young guys out there who obviously don’t have the resources to go and acquire one of these cars, but there are people around who do have the resources, so we’re trying to put them together.”

Lead times to manufacturer and deliver the cars mean orders will need to be placed soon, though the series is still not in a position to produce its inaugural calendar.

Much of the Australian motorsport scene is currently in a holding pattern until Supercars confirms its 2019 schedule, after which Shannons Nationals can lock in its plans for next season.

“We’ve got a number of committed owners at this point and it’s one of those things that builds momentum,” Lambden reasoned.

“The next thing that will build momentum is confirmation of races.

“I know there are some people just waiting for that, and that’ll make their mind up for the. I’m very confident that we’ll have a decent grid.”

While targeting 16, Lambden admits he needs a minimum of 14 cars for the category to be commercially viable.

“Even contractually at some of these events that’s the thing. It seems some categories can get away with less than that, which is a bit disappointing, but that’s our target.

“This has been a long project, but what we’ve got here is, this is it, This is just the best possible thing we could have come up with,” he continued.

“So this is the time for people who are thinking about, who’ve expressed an interest to actually get serious.”

VIDEO: A closer look at the first S5000 chassis