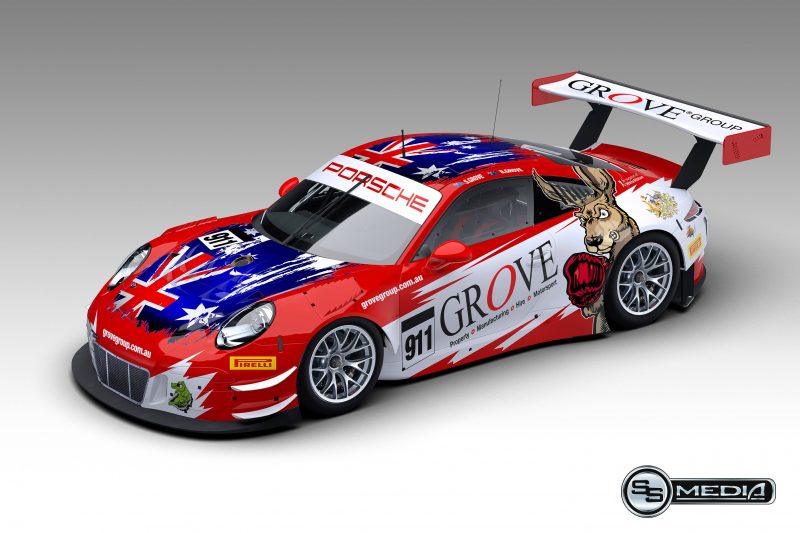 The father and son combination will pilot a Herberth Motorsport-prepared Porsche 911 GT3 R for the event which will be held in Bahrain.

The GT Nations Cup is contested by Silver- or Bronze-rated drivers, with each ASN allowed to nominate one pairing, and has been implemented as a companion to the FIA GT World Cup held at the Macau Grand Prix.

“To represent Australia at an international event with my father is pretty special,” said Brenton Grove.

“We have strong ties to Porsche in Australia and Germany so to be able to do the event in a Porsche GT3 R, representing Australia is a really special thing.

“For us, it’s one of the most exciting racing programs we have embarked on. For everything to line up and fit into our schedule was pretty fortunate and also to both qualify for the required driver ratings.”

While Brenton has spent this season in the Dunlop Super2 Series, he and Stephen began the year with a win in Class B for Carrera Cup cars at the Liqui-Moly Bathurst 12 Hour.

Stephen has continued to make a number of overseas cameos around his regular drive in Porsche Wilson Security Carrera Cup Australia, meaning that the GT3 Porsche will be a new challenge for both.

“Neither of us have ever driven a GT3 R before and we’ve never been to the circuit, so the preparation will be quite different,” added Brenton.

“Because we can’t get there any earlier or drive the car beforehand, there will be a lot of simulator stuff in attempt to adapt to the car as quickly as possible.

“When we arrive, we will catch up with the team at Herberth Motorsport and they will get us up to speed with everything we need to know ahead of the race. They are an extremely experienced team and I’m sure they will accelerate our learning curve.

“It’s one of the main reasons we chose to do the event with Herberth. They are well regarded within the Porsche family and have had tremendous success with the car.”

“Representing your country on any stage is always an honour and we are very much looking forward to seeing Brenton and Stephen show the rest of the world what they can do,” said Arocca.

“The FIA GT Nations Cup is a really exciting competition and we can’t wait to see the Groves on the international stage flying the Australian flag.”

Earlier this month, Matt Campbell won the 24H Barcelona with Herberth in a 911 GT3 R.

The FIA GT Nations Cup will be held at Bahrain International Circuit on November 30-December 1.