POLL: Which co-driver impressed you the most at Sandown?

POLL: Which co-driver impressed you the most at Sandown? 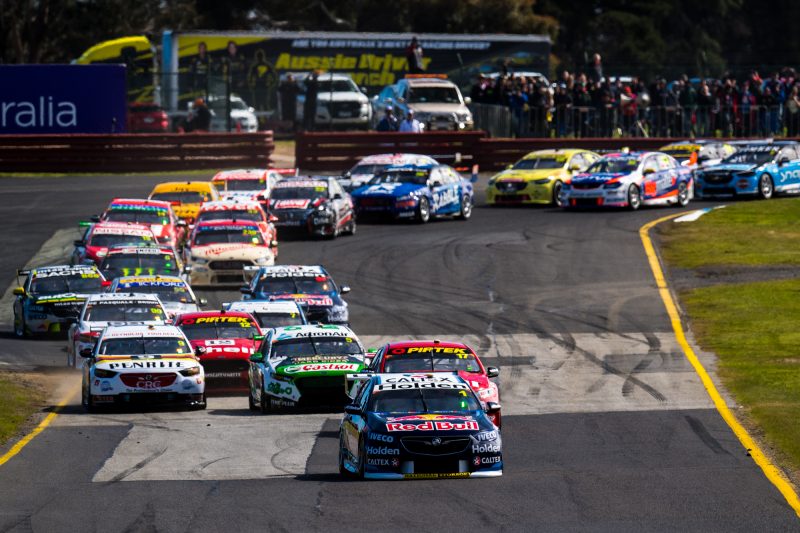 The start of the Rabble.Club Sandown 500 pic: Daniel Kalisz

The Rabble.Club Sandown 500 presented a first glimpse of the 26 co-drivers that will do battle for the Pirtek Enduro Cup.

Sandown provided a tough test for the field which included rising stars, rookies, veterans and a reigning world champion.

Changeable weather on Saturday kept the drivers on their toes prior to Sunday’s 161 lap showpiece held in bright, sunny conditions.

This year saw 15 completely new pairings line up at the historic Melbourne circuit but it was a familiar combination that took the spoils.

Triple Eight’s Jamie Whincup and Paul Dumbrell were the duo to beat throughout the weekend as they romped to a convincing win on Sunday.

Dumbrell played a key role and didn’t put a foot wrong in the triumph.

After initially claiming the lead at the start he went on to set a searing pace that saw car #1 open up sizeable leads that were wiped out by Safety Cars, before handing over to Whincup on lap 57.

The Super2 regular posted what Whincup described as a ‘Sandown Lap of the Gods’ when he logged new lap record 1:07.84s in opening practice, helped by a grippier track surface due to resin used to seal up cracks.

It was only narrowly beaten by Whincup in qualifying.

The pair would have been favourite to sweep the qualifying races had the team not called Dumbrell in while leading to switch to wets when the heavens opened.

Likewise, Earl Bamber, his opposite number in the #97 car, also impressed on his Supercars racing debut.

Bamber had only two outings in the car before Sandwon but quickly adapted to Supercars racing.

He finished second in Practice 3 but was among the group that chose to pit in the race in Race to the Grid 1 and a double stack in the lane left him 16th at the flag.

The two-time Le Mans 24 Hours winner recovered from a slow start to Sunday’s race and contact from Luke Youlden (#9 Erebus Motorsport) but once comfortable he was able to pick off drivers to hand the car over to Van Gisbergen in sixth.

Shell V-Power Racing’s co-drivers Alexandre Premat and Tony D’Alberto also showed why the squad has kept faith with the pair with two faultless performances alongside Scott McLaughlin and Fabian Coulthard.

Despite struggles with straight-line speed, Premat and D’Alberto managed to survive tricky wet conditions to finish third and fourth in their respective qualifying races.

Premat ran second in the opening stint of Sunday’s race while D’Alberto was fifth before the latter’s fuel saving helped car #12 jump ahead to third when McLaughlin and Coulthard took over the entries on lap 55 and 56 respectively.

McLaughlin managed to bring the car home in fourth while Coulthard came home in seventh.

Veteran co-driver Steven Richards showed he has lost none of his skill by delivering a faultless showing in Sunday’s race to help Craig Lowndes to third to complete a Triple Eight trifecta.

Starting from 10th, Richards climbed to seventh and pitted early on lap 18 and took advantage of a lap 23 Safety Car which saw him rise to second. It ultimately set up a run to a podium finish.

Other drivers that starred over the weekend included Erebus Motorsport’s young gun Will Brown.

The Super2 racer on his Supercars main game debut topped the times in Practice 3 and finished 12th in Race to the Grid 1.

Brown drove a strong opening two stints on Sunday to hand the car over to Anton de Pasquale in sixth, the entry ultimately finishing in 12th spot

The only blemish was an unfortunate piece of contact that spun Aaren Russell around at Turn 1, which was deemed a racing incident.

Russell deserves a mention after he scored a breakthrough win in Race to the Grid 1 in the #7 Nissan Motorsport Altima he shared with Andre Heimgartner.

The Newcastle-born driver was the pioneer in tricky wet conditions but held his nerve to take the spoils.

A spin, described earlier while in sixth, hampered his run but he still managed to complete his laps in 16th position.

Nissan team-mate Garry Jacobson could also prove to be a smart signing after he produced a strong display to climb from 16th to eighth in his stint behind the wheel of Rick Kelly’s Altima.

Despite an issue in a pit stop, Kelly battled back from 14th to finish eighth.

Luke Youlden, the co-driver of the sister Erebus Motorsport Holden, is worthy of recognition having helped David Reynolds claim pole for Sunday’s race with an impressive run to second in Race to the Grid 1.

Last year’s Bathurst winner survived contact at the start and recovered from tagging Bamber to provide Reynolds an opportunity to finish fifth.

Speedcafe.com has picked out a handful who starred at Sandown but this week’s Pirtek Poll wants to know which co-driver impressed you the most.