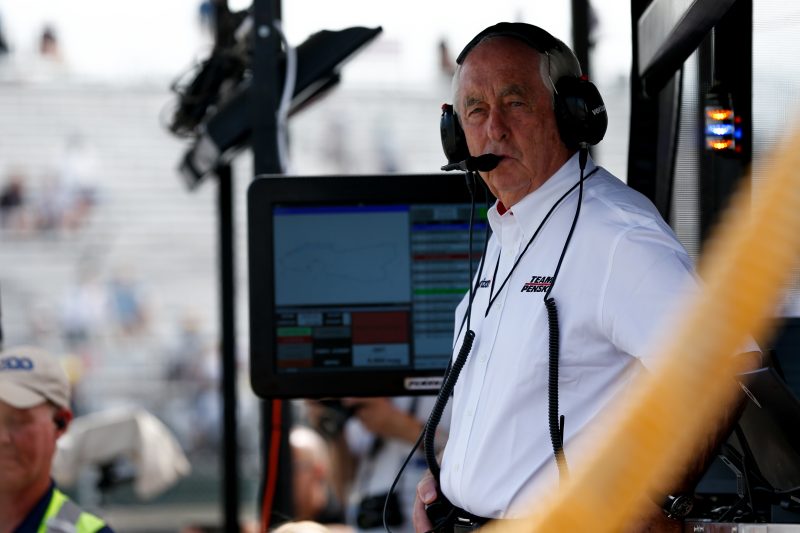 Roger Penske has paid tribute to the drivers and crew members who have helped get his team to its 500th race win across all series.

Brad Keselowski not only had the honour of bringing up the milestone when he won a carnage-filled NASCAR Cup Series race at Las Vegas, but in doing so became Team Penske’s equal-most prolific race winner with 59 in total.

Penske himself watched the result come through from the timing stand at Sonoma Raceway where the Verizon IndyCar Series finale had already started by the time the late-running NASCAR race finished.

What a milestone for @Team_Penske. 500 wins in @IndyCar and @NASCAR, and all racing series for the organization. A happy team owner celebrates in Sonoma! pic.twitter.com/JAoGa97lP7

Speaking minutes after the conclusion of the South Point 400 in Las Vegas, ‘The Captain’ was almost lost for words as he reflected on the achievement.

“Well, I’ll tell you, first an incredible effort by so many drivers and so many people that have worked for us over the years,” Penske said on NBC Sports.

“Brad (Keselowski) and Joey (Logano) and (Ryan) Blaney today (who all finished top five in the NASCAR race)… I mean I can’t believe it.

“That first Indy win in ‘72 with Donny (Mark Donohue) who kind of kicked us off… It’s been a team effort, the sponsors, the manufacturers who have worked so well with us.

“The fact I’m standing here where I am… quite a day.”

The day was also a landmark one for Team Penske as it marked the end of the tenure of Clive Howell, the team’s long-time General Manager.

Howell joined Team Penske in 1979 and initially worked as a mechanic and fabricator at Penske Cars in England before crossing the Atlantic and rising through the ranks.

“Well Clive has been with us almost 40 years, started over in Penske Cars and is going to retire this weekend,” noted Penske.

“It’s a big one for him, but I can’t thank all the people that work for us (enough).

“All that I have ever achieved, I never could have thought about it when we started.

Among those who have contributed to the haul are a number of Australians and New Zealanders, including at DJR Team Penske where records since the American group’s buy-in are counted.

Will Power is the most prolific Australian in the Penske records by virtue of the last 32 of his 35 IndyCar/Champ Car wins.

In a special month of May for Team Penske, Power delivered not only its 200th IndyCar win on the road course at Indianapolis but backed up a fortnight later with its 17th triumph in the 500 proper and his first.

After Penske switched back to Helio Castroneves’ car for the Brazilian’s Indianapolis cameos, Power bagged his first win with The Captain as strategist at Gateway last month.

“It’s pretty cool that Team Penske has reached that many wins and it is quite a milestone,” said Power from Sonoma, where he finished third.

“I’m so fortunate to be one of the drivers to be a part of this team’s incredible history and am honoured to be able to contribute to that number.

“The team has so many talented people between engineers, mechanics, fabricators and the list goes on and on.

“There are lot of wins still in the team’s future, and I know myself and my team can’t wait to help add to the growing number again.”

Ryan Briscoe also has seven competitive IndyCar wins for Team Penske plus the non-championship race when the category last ran on the streets of Surfers Paradise in 2008.

Dick Guldstrand, George Wintersteen, and Ben Moore took win number one when they drove a Chevrolet Corvette Stingray to victory in the 1966 24 Hours of Daytona.

More than half a century later, the Ford Fusion NASCAR has now been written into the history books as the car with which Keselowski won the famous team its 500th. 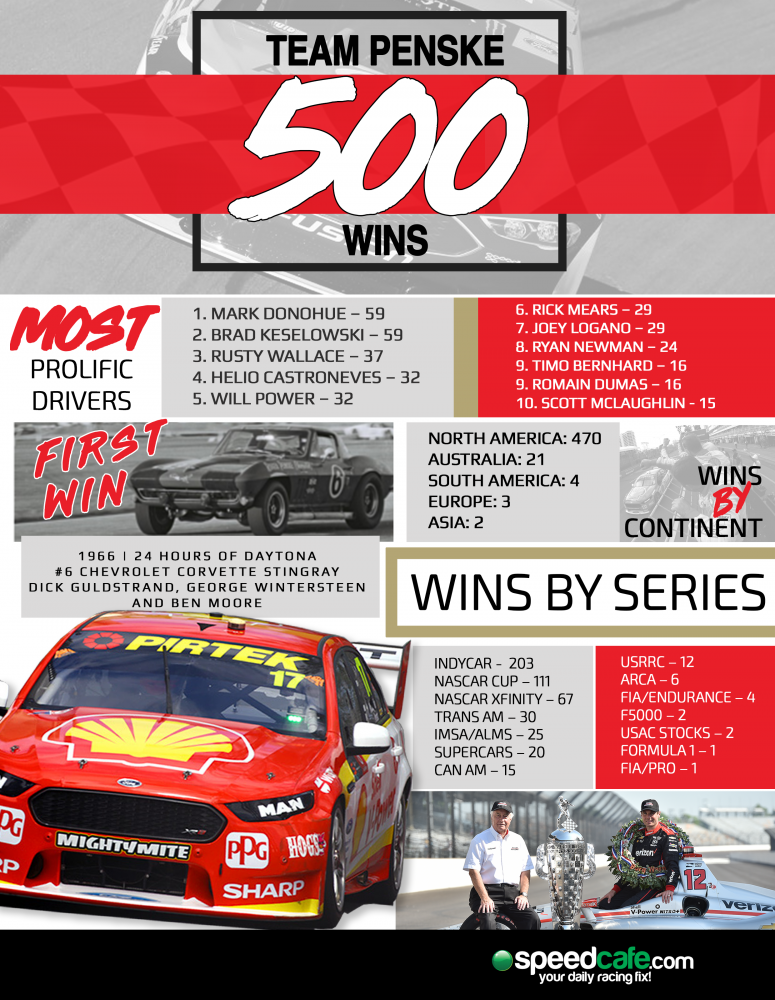