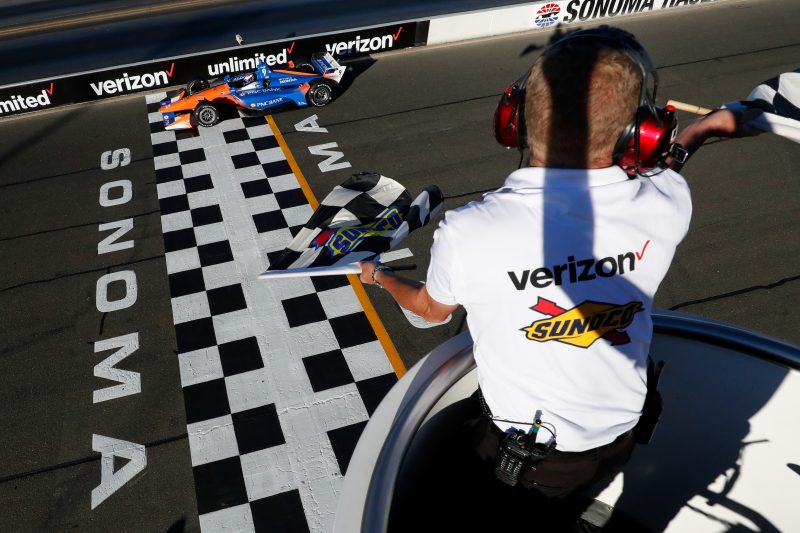 Scott Dixon has won a fifth Verizon IndyCar Series despite the best efforts of Alexander Rossi to fight back from a first corner incident which left his car damaged.

Dixon was in a commanding position when the #27 Honda dropped to last with a damaged front wing on the first lap of the race.

However, a Caution fell Rossi’s way in the middle of the race and the Andretti Autosport driver scythed from near the back to seventh position before the final pit stops.

He gained a couple more through that cycle but made no further progress in the run to the finish, when Dixon cruised in second position behind Ryan Hunter-Reay.

After a delayed start due to the late-running NASCAR Cup Series race on the same US television network, Rossi’s title hopes took a massive blow when he clipped the back of team-mate Marco Andretti as the field filed into the first corner.

Rossi plummeted from a starting position of sixth to the back of the 25-car field, although he stayed on the lead lap, as pole-sitter Hunter-Reay gapped second-placed Dixon.

The #28 Andretti Autosport Honda got as far as 4.3s clear of the #9 Chip Ganassi Racing Honda during the first stint, although only 2.3s separated them when the first cycle of pit stops completed after 18 laps.

At that time, Rossi was 20th and attempting to stretch to three stops despite his first coming after just a lap.

He lost more positions to backmarkers while trying to save fuel before relenting at the end of Lap 25 due to worn red tyres.

That stop put Rossi a lap down, which he was soon trying to get back of at least Dixon as both circulated on blacks.

The New Zealander soon let him go, not long after Rossi had nearly made contact, but Hunter-Reay surprisingly put up more resistance.

Rossi thought he had leapfrogged his team-mate to get back onto the lead lap but was forced into the dirt as Hunter-Reay continued to race.

Hunter-Reay pitted a second time at the end of Lap 39, followed by Dixon, when they went different ways as Dixon went back to red tyres.

Graham Rahal triggered the only Caution of the race on Lap 43 when he pulled off the side of the track with an engine problem in the #15 Rahal Letterman Lanigan Honda.

That was a big break for Rossi as it ensured that he would stay on the lead lap when he opted to pit again under yellow.

Car #27 was in fact into the lane twice to top up, given that he was 20th and last of those on the lead lap, and took red tyres on the second occasion.

The race restarted at the end of Lap 49, where the restart zone starts before the final complex of corners, and the back of the pack was a mess as cars fanned out and checked up.

Rossi took advantage by jumping almost immediately to 15th, then carved his way to 11th in the next two laps.

The 2016 Indianapolis 500 winner was on a mission, sending Car #27 down the inside of Josef Newgarden (#1 Team Penske Chevrolet) at the hairpin on Lap 51 and making contact with the outgoing champion.

When he came up behind eight-placed Tony Kanaan (#14 AJ Foyt Racing Chevrolet), the veteran let him past, and Rossi quickly disposed of Ed Jones in the #10 Chip Ganassi Racing Honda for seventh.

He pitted for a final time on Lap 59, having failed to make any inroads on Sebastien Bourdais (#18 DCR w/ Vasser-Sullian Honda), and gained two positions in the cycle as he took on blacks for the run home.

Hunter-Reay edged away from Dixon again, who was caught by Power but ran in second position until the final chequered flag of the season after 85 laps in wine country.

Rossi’s recovery petered out as he faded to seventh and finished second in the series.

On the day it was Power third, Pagenaud fourth, Marco Andretti in fifth, Bourdais in sixth, and Newgarden eighth.

Power held on to third in the points while Hunter-Reay jumped Newgarden into fourth.