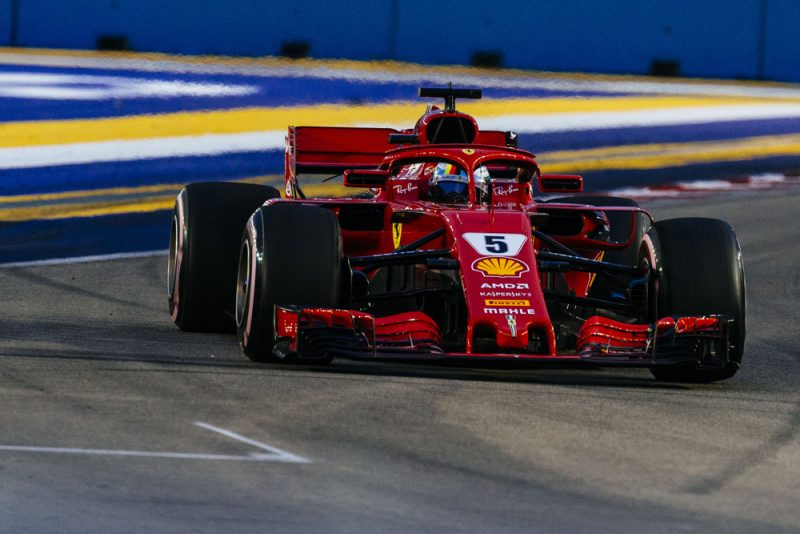 An aggressive strategy in the early stages of the Formula 1 Singapore Grand Prix from Ferrari failed to net the desired results as Sebastian Vettel trailed home Lewis Hamilton in third place.

Vettel moved to second off the start, before being called into the lane to swap the hypersoft Pirelli tyres for a set of ultrasoft rubber.

Having qualified inside the top 10, Vettel was compelled to use the hypersoft tyres he’d set his lap on in Qualifying 2, while the theoretical ideal strategy was to swap to the yellow-striped soft tyres after 15 laps.

Instead, Ferrari tried to force Mercedes’ hand by bolting on a set of the faster but more fragile ultrasofts.

It was a gamble that failed to pay off, as Hamilton was able to lift his pace sufficiently on his in-lap to cover Vettel and maintain the lead that would ultimately result in victory.

“Obviously the first stint was a cruise for most of it and then Lewis was picking up the pace,” Vettel explained.

“I think overall you see the gap in the end it’s clear that we were not fast enough today in the race.

“We need to understand why, obviously it’s largely due to how we decided to race – on which tyres, for how many laps, etcetra.

“With what we did we tried to get to first position and get ahead but Lewis was too quick.

“Once you are ahead you can control the pace around here, but we never got ahead.”