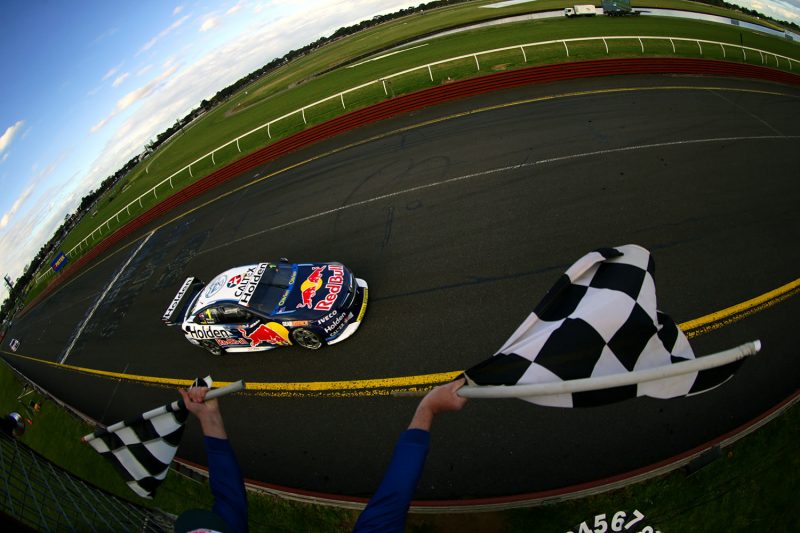 The #1 Triple Eight entry of Jamie Whincup and Paul Dumbrell

Triple Eight Race Engineering has pulled off a crushing victory in the Rabble.Club Sandown 500 as Cars #1, #97, and #888 finished first, second, and third.

Craig Lowndes and Steven Richards finished third in the Autobarn ZB Commodore after the latter jumped to second position in the first two stints of the race.

Scott McLaughlin finished 25.1772s off the leader in fourth position in the #17 Shell V-Power FGX Falcon which he shared with Alexandre Premat.

David Reynolds made the race for fourth a close-run thing but couldn’t find a way past in the end.

He took the chequered flag within six tenths of McLaughlin despite co-driver Luke Youlden appearing to incur minor steering damage when the #9 Erebus Penrite ZB Commodore copped contact before the first corner.

Dumbrell took a clear lead to the first corner from the outside of the front row, while slow-starting pole-sitter Youlden was squeezed by Dean Canto on driver’s left which cannoned him into Premat on the right.

Richards gradually crept up to seventh, thanks in part to Brown turning Aaren Russell around at Turn 1, before becoming the first of the top 10 to pit on Lap 18.

Dumbrell, meanwhile, was 18.6s clear of second-placed Premat when the Frenchman brought the #17 Sierra tribute into the lane on Lap 22.

Youlden struggled through the first stint with a ‘Chickadee’ car running slightly right-hand down and a guard peeling away but staved off D’Alberto until the pit stops began.

Dean Fiore then pulled off the circuit with broken steering after a hit from James Courtney, who pinched a brake and slid into the #23 Industrial Athlete Nissan Altima while passing at Turn 2.

It saw the Safety Car called on Lap 23, hastening the end of the first pit cycle.

Jack Perkins was 16th after Courtney, the only primary driver to start given his DNF in Race for the Grid 2, vacated the #25 Walkinshaw Andretti United ZB Commodore.

The second stint followed a similar pattern as Dumbrell gapped Richards seemingly at will and was 19.7s up on #888 when the latter pitted from second position at the end of Lap 55.

Bamber was the main mover in van Gisbergen’s #97 Holden as he gradually rose to sixth position, despite seemingly struggling early in the stint when he actually ceded a position to Youlden.

The only other change to the top 10 was Moffat into 10th at the expense of Youlden.

Most of the field pitted to swap co-drivers for primaries at the end of either Lap 55 or 56, although Triple Eight waited another lap to call Dumbrell in.

Just as he arrived, the Safety Car was called in order to salvage the #18 Preston Hire ZB Commodore after Jason Bright locked up and ran into the kitty litter at Dandenong Road.

The neutralisation served to bunch the field up again and essentially set up a 100-lap primary driver race (but for Perkins staying in #25).

Dumbrell led Lowndes and Fabian Coulthard, who jumped spots due to a shorter fill achieved accidentally by D’Alberto’s fuel saving in Car #12.

Car #97 gained two positions in the pits to sit fourth while McLaughlin was fifth having taken on more fuel than those around him.

The second restart took place on Lap 62 and Reynolds got past team-mate De Pasquale at Turn 1 a lap later.

For the next handful of laps, the three Triple Eight cars were faster than anyone else, until van Gisbergen began to be held up by Coulthard.

The 2016 champion finally put the move on Car #12 at the start of Lap 81, by which time McLaughlin had all but caught them, and Coulthard let the other crimson Falcon go by a short time later.

Reynolds was the first of the front-runners to make a third pit stop at the end of Lap 88, and Lowndes emulated him a lap later having drifted to around half a second a lap slower than those around him.

Despite that, he regained second position with just 2.3s between he and Car #1 when the cycle completed at the end of Lap 94.

Rick Kelly was third having stopped on Lap 79 and taken less fuel onto the 2002 Castrol Perkins lookalike, from van Gisbergen, Winterbottom, and Heimgartner (#7).

Courtney got back into Car #2 almost as soon as Perkins had met his 54-lap minimum and was seventh, from McLaughlin, Reynolds, and Coulthard.

Garth Tander was 12th despite the #33 Garry Rogers Motorsport ZB Commodore ending Lap 1 last after co-driver Chris Pither was turned around by Dale Wood (#21 CoolDrive ZB Commodore) at Turn 2/Turn 3, an incident which stewards decided did not warrant penalty.

The order gradually began to correct itself during the next stint of the race, with the genuine front-runners threading their way past those that were slightly out of sequence.

Van Gisbergen passed Kelly just before the Lap 100 mark to make it an all-Triple Eight top three, while McLaughlin caught #15 and then got by on Lap 115.

Despite Lowndes drifting at times to half a second a lap slower than Whincup, it was still the Banyo-based Holdens that were fastest on-track.

Van Gisbergen got by Lowndes just beyond the Lap 120 mark, the veteran making it easy given he was over nine seconds in arrears of #1 by that time.

When McLaughlin pitted for the final time nearly 34 seconds from the lead with 36 laps to go, the result seemed almost a formality despite a small amount of fuel in hand for #17.

Van Gisbergen pitted from about 10 seconds behind Whincup at the end of Lap 127 and re-emerged about as far behind after Whincup took his last stop with 29 to go.

The 2017 Virgin Australia Supercars Champion cruised home to victory for he and Dumbrell, their third together at Sandown and Whincup’s fourth in the 500km enduro.

“Couldn’t be happier, car has been awesome all weekend,” said Whincup.

“PD did a fantastic job, but hey, it’s not over until it’s over. We just kept our heads down, kept concentrating… this race has got away from us a few times.

“Thankfully no Safety Car, nice and clean race, gearbox held in there, tyres held in there and we got there in the end.”

Dumbrell added, “I think everyone in the team did a great job this weekend.

“There was no doubt we had one lap pace, but today we proved we had pretty good durability as well.

“It’s always good to get a win here; we’ve had pretty good pace the last couple of years but haven’t been able to clinch it. We’ll certainly enjoy it tonight.”

Lowndes drove a lonely final stint to round out the podium for Triple Eight, and the intrigue in the final half hour turned to the battle to be next best.

Reynolds bridged a gap of a couple of seconds to catch McLaughlin with a little less than 15 laps to go, but didn’t make a serious play to try and pass the leading Falcon in the end.

Scott Pye ran sixth for the final stint in the #2 Holden, while the top 10 was rounded out by Coulthard/D’Alberto, Kelly/Jacobson, Tander/Pither, and Mostert/Moffat.

Will Davison and Alex Davison were last on the lead lap in 11th in the #230 Milwaukee FGX Falcon, while the top 21 finished within a lap of the winners.

The #19 Tekno Autosports ZB Commodore of Jack Le Brocq and Jonathon Webb was five laps down with a rose joint failure, and Lee Holdsworth and Bright 16 laps down after the latter’s off.

Nick Percat brought the #8 Brad Jones Racing VF Commodore home 19 laps down after the gear shifter broke in Macauley Jones’ hands early in the afternoon, while Michael Caruso was the last finisher in his battered #23 Altima, another eight laps back.

The #78 Harvey Norman Nissan Altima of Simona de Silvestro and Alex Rullo was the sole retirement due to an engine problem.

Van Gisbergen’s championship lead is now 55 over McLaughlin and another 283 to Whincup.

The next event is the championship’s biggest, the Supercheap Auto Bathurst 1000, on October 4-7.