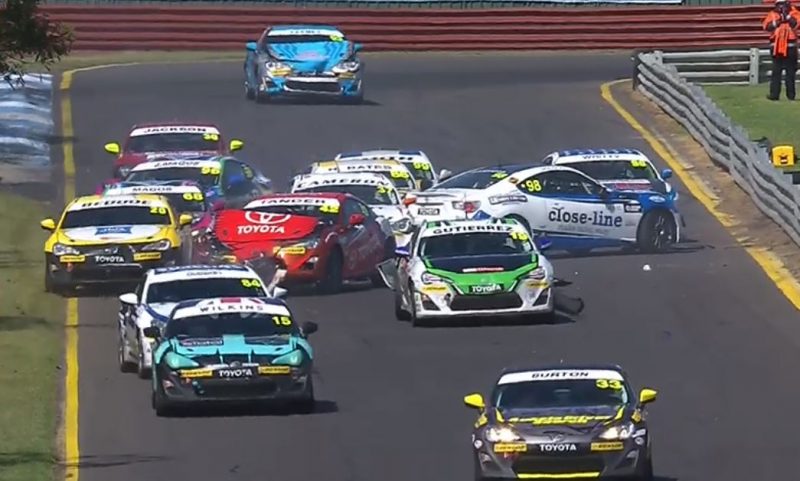 The final race of the weekend for the Toyota 86 Racing Series was marred by a sizeable pile up pic: Fox Sports

Jake Klien has won a crash-marred final race of the weekend for the Toyota 86 Racing Series at the Rabble.Club Sandown 500.

A late race restart closed the field up, as Cam Walton went side by side with Aaron Cameron on the exit of Turn 4.

Contact fired Walton into the outside wall, with the New South Welshman’s car tracking back onto the racing line and tagging George Gutierrez who then spun in front of the pack.

Carnage ensued as the field checked up, with invited drivers Leanne Tander and Harry Bates among those involved.

All drivers emerged from their cars under their own steam.

A Safety Car just prior was triggered when current series leader Tim Brook ended up in the gravel at Dandenong Road.

Brook had been duelling for the lead with Luke King for much of the encounter, but made contact with the right rear of King’s car under braking and ultimately spinning into the sand.

Surviving the last lap pile-up, Luke van Herwaarde snagged the lead from King just before the Safety Car was deployed for Brook’s incident.

But under braking for Turn 9, van Herwaarde ran wide, allowing Klein through into the lead, with the latter maintaining the position in the final corners for the win.

Van Herwaarde managed to cling to second, with David Sieders third after a troubled start to the weekend.

Race 2 winner and pole-sitter Broc Feeney suffered damage to his car when he ran off the road while battling with Brook for the top spot early in the piece.

Feeney dived up the inside at Dandenong Road on Lap 1  but ran deep and dropped off the road, damaging the exhaust after contact from Brook and ultimately had to pit.

Another notable incident on Lap 3 brought out the first Safety Car of the race when Liam McAdam copped a hit from Dylan Thomas at Turn 1, with McAdam beaching in the gravel.

The restart on Lap 6 triggered the intense battle between Brook and King which ended up with the former in the gravel.

The Toyota 86 Racing Series heads to Mount Panorama for its next round in support of the Supercheap Auto Bathurst 1000 from October 4-7.