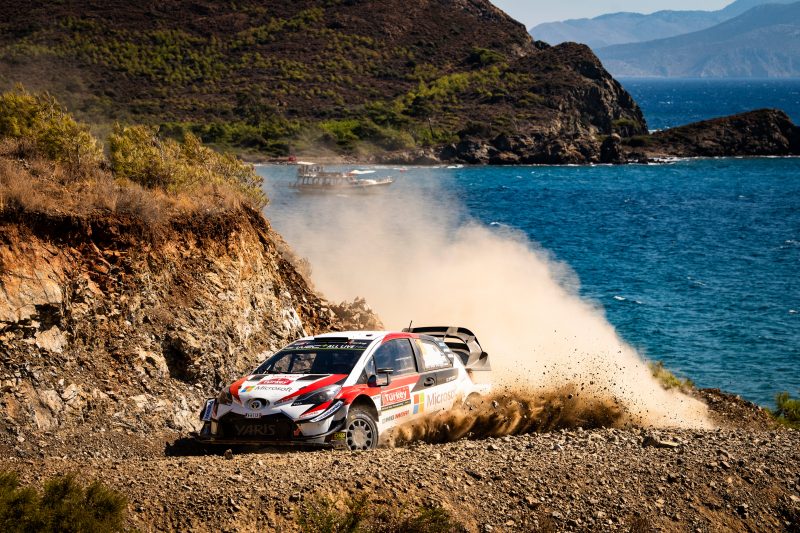 Ott Tanak finds himself leading Rally Turkey with a day remaining after Thierry Neuville and Sebastien Ogier both retired and Craig Breen’s Citroen went up in flames.

The chaos started early when World Rally Championship leader Neuville, who headed the event after Friday, suffered a suspension failure on the first stage of the day which saw components punched through the bonnet of his Hyundai.

The Belgian finished the stage before retiring from the day and will return on Sunday under Rally 2 regulations in the hope of salvaging Power Stage points.

Ogier won that stage by 22.5s and took over the rally lead before his M-Sport Ford suffered a broken right-front track control arm on the following Datca test.

He and co-driver Julien Ingrassia hastily repaired the Fiesta and, despite being hit with a 60-second penalty for a late check-in to the final stage of the loop, they went and won Special Stage 10 to sit fourth overall.

The Frenchmen’s day finally came to an end when Ogier slid off the road into a tree on SS11, leaving him officially 12th overall.

Hyundai’s Andreas Mikkelsen, who won SS9, inherited top spot only to strike driveshaft problems at the start of the afternoon loop and spin his Hyundai twice.

He too was issued a penalty for late check-in and had to finish the day with rear-wheel-drive only but is still fifth overall.

It all means that Ott Tanak, winner of the last two rallies but only fifth heading into Saturday, leads by 13.1s after winning SS11 and SS13.

New Zealander Hayden Paddon should finish third in what is now the top Hyundai, given he is 57.4s behind Latvala but 2:11.7s ahead of fourth-placed Teemu Suninen (M-Sport Ford).

“It has been complete mayhem out there today,” said Paddon.

“We have stuck to our plan, and it seems to have paid off. It didn’t quite work out yesterday but this has, at times, felt like a different rally compared to Friday.

“It’s been much more loose and particularly tough on the tyres. In the afternoon loop, we had to take it a bit steady towards the end because our tyres were practically bald.

“I have learned my lessons from previous rallies, where we’ve gone out too fast too early and ended up by the side of the road. It can be frustrating when you look at the stage times, but it seems to be a good tactic.”

Breen was eighth after Friday but is out after his Citroen caught fire and was burnt out.

He and co-driver Scott Martin were out of the C3 when it went up in flames.

Round 10 of the season finishes tonight (AEST) with four more stages totalling 34.98km.