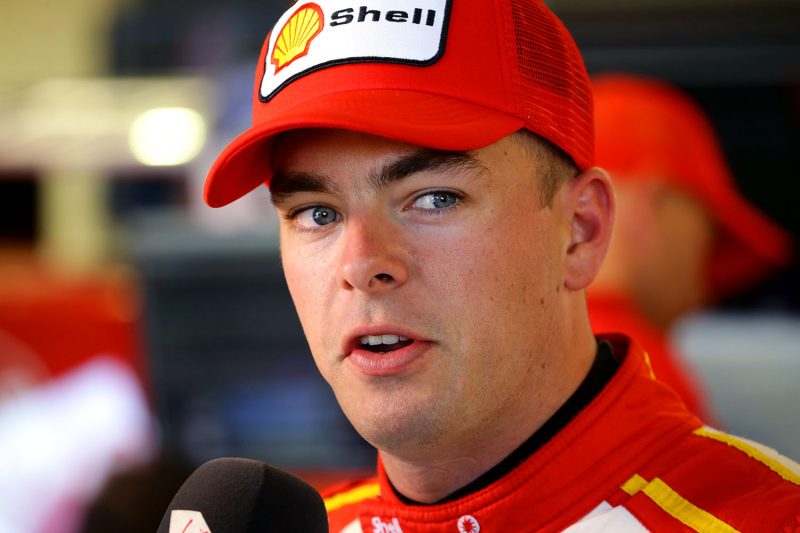 Scott McLaughlin is worried by the ‘unbelievable’ pace from the Triple Eight ZB Commodore after witnessing the team dominate the Rabble.Club Sandown 500.

The title contender has struggled to match the pace of the factory Holdens during the weekend with the Kiwi only able to finish a distant fourth in the 500km enduro as Triple Eight scored a dominant one-two-three.

McLaughlin’s Shell V-Power Racing team had been concerned by the straight-line speed deficit to the ZB Commodore throughout the weekend, resorting to trimming out the wings of its Falcons to combat the situation.

McLaughlin admitted that Triple Eight pace advantage was a shock.

“We knew they were going to be fast but how fast they were was pretty unbelievable,” McLaughlin told Speedcafe.com.

“The #1 car came out fast and then Shane and Craig were probably at my speed and then ‘boom’, they were up there as well.

“Credit to them. We have got a bit of work to do but it is disappointing.

“I feel like we trimmed our car and we lost in the corners and we put the wing back up and we are back with them in the corners, but then we are losing down the straights, there is something a little bit weird going on there.

“Absolutely they have got the edge but we have had that edge as well. It happened in Tasmania and we come to a track where there are long straights and you have to go a little bit different with the set-up to combat that and that in turns hurts you.”

Triple Eight’s pace at the long straights at Sandown has left McLaughlin concerned heading into the Supercheap Auto Bathurst 1000 next month.

However, he is confident the team behind him can close the gap to the championship rivals.

“Sometimes you need a lot of downforce there over the top so I’m sure there are going to be parts where we are strong but absolutely down the straights they have a low drag car and it is going to be very fast down the chute,” he added.

“If there wasn’t a Safety Car today they would have lapped the whole field so it is a sign.

“We have got to work our backside off to try and get this old, old girl (Falcon) going.

“I’ve got a great team behind me which works so hard and never give up. I’m so proud of everyone we have just got to dig deep we know we are fast at a high downforce track I can’t see a reason why we can’t do that again.

“I’m really confident going to Bathurst but I am worried.

“We have just got to get on with it.”