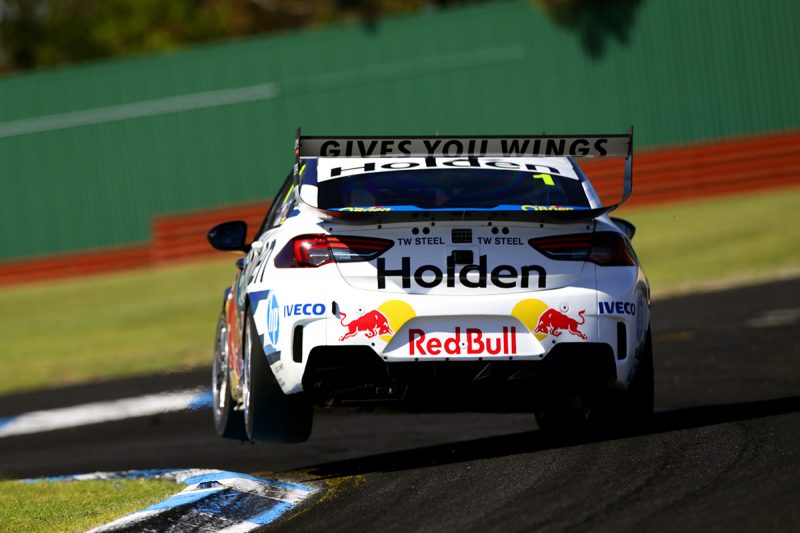 Jamie Whincup has delivered Paul Dumbrell top spot for the start of Armor All Race for the Grid 1 after snipping time from the latter’s practice record at Sandown.

Scott McLaughlin, on the other hand, only managed to qualifying the #17 Shell V-Power FGX Falcon 14th for this afternoon’s co-driver sprint.

The #1 Red Bull HRT Commodore was the only car into the 1:07s bracket in the 20-minute qualifying session, in which Chaz Mostert was second and James Courtney third.

Whincup was three tenths clear of the field after the first runs with a 1:08.1424s, lowered the benchmark marginally in his second run, then laid down a 1:07.8389s just before the chequered flag.

Car #1 is still the only entry into the ‘sevens’ all weekend after Dumbrell and Whincup topped Practice 1 and 2 respectively.

“This is a massive deal,” joked the latter.

“PD had the Sandown lap of the gods yesterday and I ended up pipping him by one hundredth.

“I would have been hearing about that for the next 25 years… what a relief to get there.

“Car was excellent, guys and girls did a great job and I hand it over to PD in the best possible spot.

“(There is) Still a little bit of that crack treatment stuff on the track from yesterday (affecting grip levels), but the car is hooked up, the car is definitely better this year than what it was last year.

“But in saying that, we’ve been in this position before but just made rookie errors, so got to keep the concentration.”

McLaughlin, on the other hand, clocked a best of 1:08.4731s in Armor All Qualifying in a Falcon which had been trimmed out to very low rear wing angle.

The Kiwi was already on the edge of the top 10 when he ran off at Turn 1 late in the session, costing himself a chance to improve.

“Yeah, that was average from my side, so I need to work on that,” lamented McLaughlin.

“Certainly… we’ll have to work on it together. Got a bit of work to do.

“It definitely felt better then but it’s just very similar to Tailem Bend; we just don’t have the outright speed at the moment.

“We’ll just have to rally and keep going; got to give myself a big kick up the backside and get on with it.”

Mostert (#55 Supercheap Auto Racing FGX Falcon), on the other hand, finished with a 1:08.1206s, 0.2817s slower than Whincup, to edge the lap which Courtney set to put the #25 Boost Mobile ZB Commodore second ahead of the final runs.

“I felt confident that the car felt pretty good across the runs, I had a bit of traffic on the second one. Still didn’t get all my PBs (sectors) together.

“It’s just good to give it to (co-driver James Moffat) on the front row and see what he can do and we’ll just play it by our strengths see how we go.”

David Reynolds (#9 Erebus Penrite ZB Commodore) and Scott Pye (#2 WAU ZB Commodore) similarly had to rely on their second-run efforts but ended up fourth and fifth.

Andre Heimgartner (#7 ACE Altima) was the first of the Nissans in sixth, while Anton De Pasquale (#99 Erebus ZB Commodore) made it two ‘Chickadee’ cars in the top 10 by taking seventh.

Shane van Gisbergen rounded out the top 10 having complained of a vibration in the #97 Triple Eight ZB Commodore throughout.

Fabian Coulthard put Car #12 (DJR Team Penske FGX Falcon) twelfth on the grid, one position ahead of the #888 Autobarn ZB Commodore piloted by Craig Lowndes in the session.

Last year’s Sandown 500-winning co-driver Richie Stanaway brought up the rear of the field in the #56 Rabble.Club FGX Falcon, 1.4138s off the pace.

The session was dry, unlike practice earlier in the morning, but subject to a major crosswind on the straights.

The extent of the incidents was a handful of offs at the back straight and a small excursion for Simona de Silvestro at Dandenong Road on her way to 24th in the #78 Harvey Norman Nissan Altima.

No co-drivers took to the track, but they will this afternoon for 20 laps when Armor All Race for the Grid 1 starts at 1340 local time/AEST.