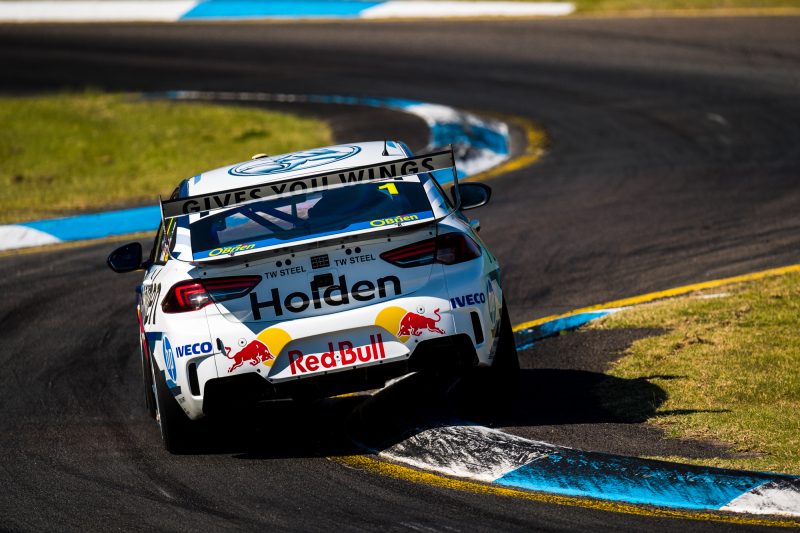 Supercars drivers have raised concerns regarding the track surface at Sandown Raceway should forecasted rain hit the venue today.

The historic Melbourne circuit has undergone work in the lead up to this weekend’s Rabble.Club Sandown 500 to seal cracks in the track surface, which has altered grip levels.

A resin has been used to patch up areas of the track only a few days prior to the race, after a similar process occurred at Winton in 2014.

The patch up job initially offered increased grip to drivers resulting in record lap times in Friday practice, held in the dry, but how the material will react in the wet is unknown.

Thunderstorms and hail have been predicted to hit the circuit today which will determine the grid for Sunday’s Sandown 500.

Seven-time champion Jamie Whincup believes the track surface could be an issue in the wet and has even suggested that officials should consider starting qualifying races under Safety Car if conditions are poor.

The Red Bull Holden Racing Team driver was surprised work on the track surface was completed so close to the event.

He even suggested the situation could miror Pukekohe last year where heavy rain on a new slippery track surface forced qualifying to be abandoned.

“It’s the biggest event that’s here at Sandown, so it’s a little bit frustrating,” said Whincup of the late patch up job.

“It is what it is and (rain) could be an issue – it could be a back straight at New Zealand material, which will come when it rains, so we’ve got to be a little bit careful.

“I think the sensible thing to do would be to throw the Safety Car out early if it’s wet and then see what the conditions are like.”

Garry Rogers Motorsport driver Garth Tander has downplayed claims that the conditions could mimic those experienced at Pukekohe, but admits it is hard to predict what the surface will be like in the wet.

“I don’t think it’ll be that bad but you can’t say, how do you know?,” Tander told Speedcafe.com.

“We’ve had this epoxy scenario happen before at Winton years ago, but we never ran in the rain on that so we’ll have to wait and see.

“The problem with Pukekohe was that the surface was so shiny that the water had nowhere to go, whereas the surface probably has changed here with the epoxy, but how that reacts to water we’ll wait and see.

“I hope it’s not dangerous, I hope it’s not an issue because we are going to get a lot of rain and we don’t want the fans to miss out with the cars not being on the track.”

Meanwhile, Nissan Motorsport’s Rick Kelly is not overly concerned by the threat of rain, reiterating that all the drivers will be in the same situation.

“It’s the same for everybody,” Kelly told Speedcafe.com.

“I mean it’s an interesting circuit it is such an aggressive surface and a lot of different surfaces as well.

“I’m not concerned, it’ll just be harder to keep the car on the track for us and the co-drivers in their race and then in qualifying. But it’s a good challenge, and we’ll see what happens.”

The Sandown 500 continues today with a 15 minute practice before Armor All Qualifying, followed by two 20 lap qualifying races, the first for co-drivers only, which will determine the grid for Sunday’s showpiece.