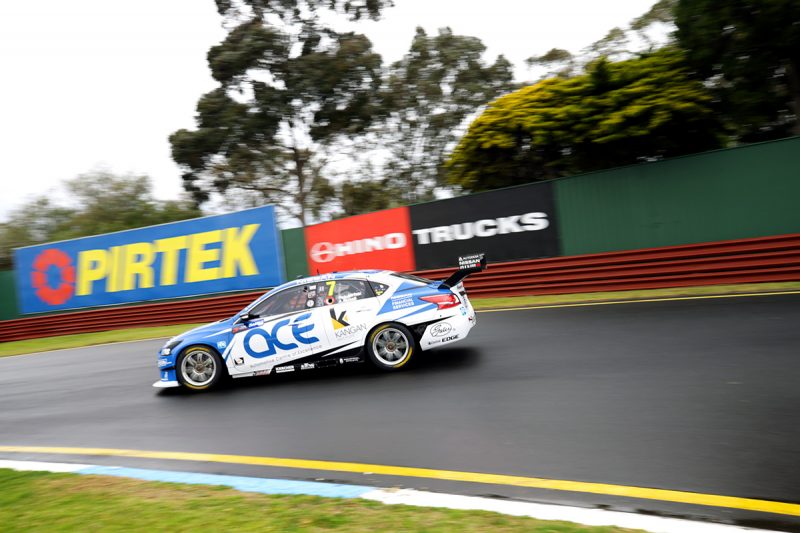 Nissan Motorsport’s Aaren Russell has won Armor All Race for the Grid 1 after hail descended on Sandown International Motor Raceway at the worst possible time.

The field of co-drivers was just about to restart on slick tyres after a crash for Jason Bright when the heavens opened in southeast Melbourne halfway into the piece.

It effectively split the field in half as 13 cars pitted for slicks after the restart and 12 persevered.

The latter dozen were vindicated when rain eased in just a couple more laps, highlighted by the 11th position finish for early leader Paul Dumbrell.

Aaren Russell won for primary driver Andre Heimgartner (#7 ACE Nissan Altima), while the drama also helped Scott McLaughlin and Alexandre Premat out of a hole as the latter finished third from 14th on the grid, behind Luke Youlden.

Dumbrell had won the start and skipped away to a 1.5s lead by the end of the standing lap, as James Moffat slotted into second from Jack Perkins and the Erebus duo of Will Brown (#99 ZB Commodore) and Youlden (#9 ZB Commodore).

Warren Luff plummeted from fifth to 21st away from the grid due to an especially tardy start in Scott Pye’s #2 Boost Mobile ZB Commodore.

Perkins, in James Courtney’s sister #25 WAU ZB Commodore, got underneath Moffat at the start of Lap 2 only for Moffat to squeeze the #55 Supercheap Auto FGX Falcon back past through Turn 2/Turn 3.

The battle which saw Dumbrell more than double his advantage in a lap in Jamie Whincup’s #1 Red Bull HRT ZB Commodore. Dumbrell was out to a margin of around four seconds when the Safety Car was called on Lap 4 as a result of Jason Bright spinning into the main straight fence in the #18 Preston Hire ZB Commodore.

Bright ran wider than Luff out of the Turn 11/12 complex and came back across the nose of Car #2, with the contact causing Car #18 to fishtail before turning around and slapping the fence on driver’s right.

Stewards investigated the incident during the Safety Car period but determined that no further action would be taken.

Dumbrell continued to lead Moffat, Perkins, Brown, and Youlden for the restart on Lap 10, at which time Perkins slid through Turn 2/Turn 3 and gave up three positions.

The complexion of the race changed again on Lap 12 when Moffat went off at Turn 4 after a hit from behind from Jones.

There had in fact been two hits from Jones, the first which Moffat survived before what appeared to be a concertina among the top four finished him off.

Jones slipped wide in the process and was nabbed by Aaren Russell, Youlden, and the two DJR Team Penske Fords.

The incident will go to a post-race investigation.

While Jones applied pressure to D’Alberto late in the piece, and Youlden bridged a one-second advantage to briefly close right up on Aaren Russell, there were no further positional changes at the front.

Aaren Russell won by just under a second to hand Andre Heimgartner the inside front row start for Armor All Race for the Grid 2, while David Reynolds will start his sprint with no one in front for the second year in a row.

“I’m just rapt for the team, they’ve been so good to me and made me to welcome here,” said Aaren Russell.

“It’s been a long road and I’m so thankful for these guys.

“The weather just threw everything at us, (I was) so nervous in the car when it was so wet down this end (of the circuit) and dry down (the other) end.

“Got lucky and got to the lead and then just pushed on. Our car was pretty good there actually. I’m a bit speechless at the moment.”

Heimgartner added, “That’s the most nervous I’ve ever been watching that.

“We’ve still got one more (qualifying) race (but) it’s just great for the boys.

“We tried to pit Aaren and then we called it too late, so we just stumbled across the right thing.”

“Sometimes you have a little luck come your way and we chose to stay out,” said McLaughlin.

“It was a bit dicey there. Alex and Tony did a fantastic job for us; those were tough conditions man. (I’ve) Never driven in hail in a Supercar before, but that was just crazy and well done to them.”

Dumbrell ended up losing time to the leaders on his way to 11th, the first of those on wets.

Brown, who did not switch to wets, finished 12th ahead of Steven Richards (#888 Autobarn ZB Commodore) and Perkins.

Bamber was delayed in pit lane having had to stack behind Dumbrell and took the chequered flag 16th in Car #97.

Rullo was off the road twice before pitting in the latter half of the race, while Fullwood came in shortly after the restart and did not reappear.

Results: Armor All Race for the Grid 1