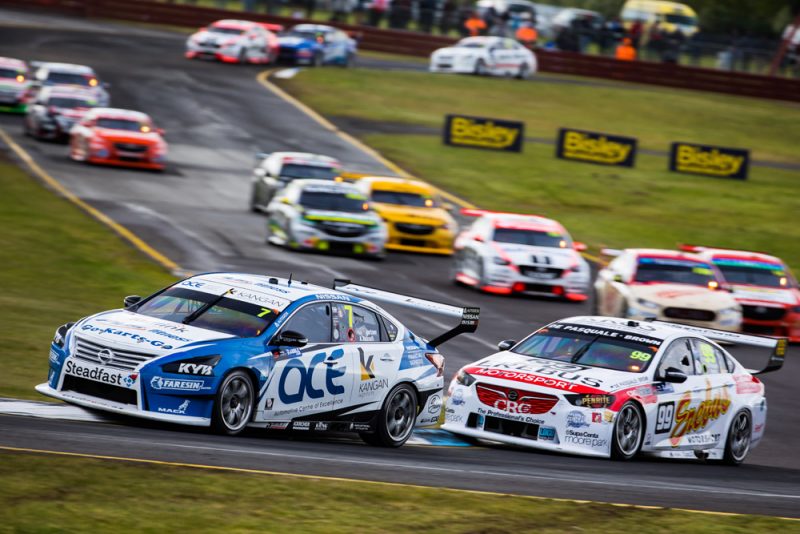 Aaren Russell has labelled his performance in the Armor All Qualifying Race for the Grid 1 as ‘surreal’ after snaring victory in the 20 lap encounter.

The former main game regular then emerged in the race lead after a tussle between James Moffat and Macauley Jones opened the door for the Nissan driver.

“Regardless of whether you’re with endurance drivers or not, they’re all top level drivers out there,” Russell told Speedcafe.com.

“I got an okay start, obviously the Walkinshaw Andretti United car in front stalled, (then) I had a good battle with Steve Richards for a lap or two.

“Before I knew it I was running third, and then first – it was a strange feeling not seeing any cars in front, it was a bit surreal actually.”

Russell admits he was a nervous leader, but tried to stay focused on his own race despite the pressure from second placed Luke Youlden.

“I had a really good gap and a lapped car kind of got in the way. Before I knew it I looked in the mirrors and he (Youlden) was right there,” explained Russell.

“I panicked a little but just got back into my rhythm and pulled away again.

“As much as I was scared for leading the race and all that I felt pretty comfortable out there as well.”

The Novocastrian driver, who recently announced that he’d been declined a wildcard entry to the Coates Hire Newcastle 500, hopes he can use the performance as a platform to secure a more consistent endurance drive.

“I feel so comfortable in this team, they’ve done such a good job of bringing us on board and taking care of me,” he said.

“I’m very privileged to be able to drive for these guys. It’s a very finely oiled team and they’re very professional in everything they do.

“I’d love to do it full time, and obviously if I had the opportunity I would jump at it, but it’s just trying to get the right opportunity.

“We all know it’s pretty cut throat out there and there’s probably some good people sitting in the background with some good budgets, but I think ultimate goal is to be asked back somewhere as an enduro driver next year and become part of a more consistent program.”

Russell and Heimgartner will line up sixth for tomorrow’s Rabble.Club Sandown 500 after the Kiwi’s own 20 lap qualifying race later in the day.