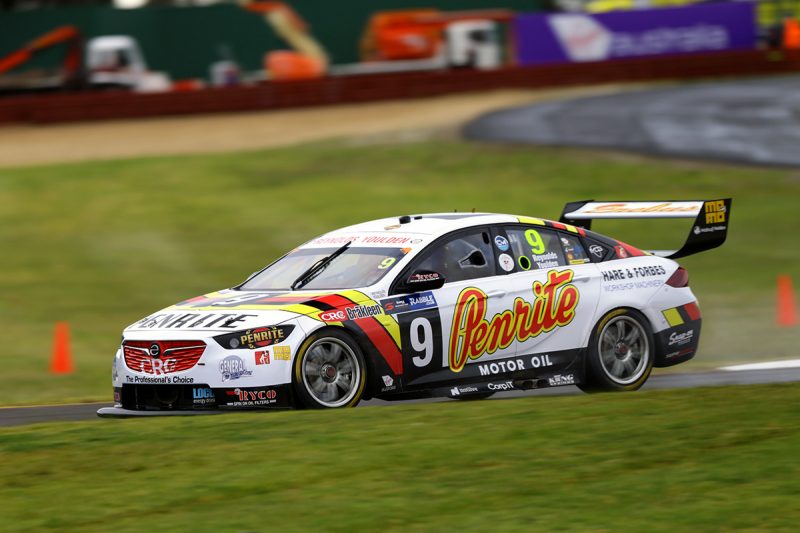 David Reynolds has held out a charging Jamie Whincup in Armor All Race for the Grid 2 to qualify on pole for the 2018 Rabble.Club Sandown 500.

Whincup started the 20-lap qualifying race from 11th after co-driver Paul Dumbrell pitted for wets during the earlier sprint but was strong in the opening laps and showed handy pace after the appearance of the Safety Car.

He made relatively light work of the Shell V-Power Fords to move into second position but experienced more resistance from Reynolds in the #9 Erebus Penrite ZB Commodore.

Intermittent rain throughout the day had stopped by the time cars left the grid, all on slicks, but the track was still wet and skies overcast.

Reynolds led the field away from the outside of the front row ahead of Scott McLaughlin, Fabian Coulthard, and Andre Heimgartner.

The latter had started from first position but was slow away after catching a big movement just before the lights went out which was not met with sanction by officials.

Whincup was eighth out of the opening corners in the #1 Red Bull HRT ZB Commodore and sixth when the Safety Car was called on Lap 4 after James Courtney slapped the tyre wall at the end of the back straight.

The #2 Boost Mobile ZB Commodore lost its right-front wheel before coming to rest in the gravel trap at Dandenong Road and while Courtney initially seemed to suggest over team radio that he was helped off the road, replays revealed no contact.

When the race restarted on Lap 8, Whincup passed Nick Percat for fifth up the back straight.

He pulled off two super moves at the ends of said straight in the next three laps, taking fourth off Mark Winterbottom and then third off Coulthard.

Whincup picked off McLaughlin at the start of Lap 13 as Reynolds set the then-fastest lap to lead by over 1.5s.

The 2017 champion responded with back-to-back fastest laps of his own and had closed up to the back of the 1986 Bathurst 1000 winner tribute inside the final four laps.

He couldn’t make any more progress, however, as Reynolds held on for what officially counts as an Armor All Pole Position for he and co-driver Luke Youlden.

“It was a bizarre crazy day, but it was all set up by this bloke here,” said Reynolds of Youlden, who was second in a rain-hit co-driver sprint.

“He did an amazing job for us in the fully wet conditions and we got very lucky with the strategy call.

“If we were probably the lead car at that time we would have pitted and ended up where Anton (De Pasquale, team-mate) was. Things organically happened today and we benefited from it.

“That last couple of laps there, my rear tyres were going off and I was struggling a bit; Jamie was a lot faster than me so I’m ever so grateful to have pole.”

“We’ve been in this position before though and it hasn’t gone so well on Sunday.

“Focus is on tomorrow and making sure we minimise the mistakes and be there at the end.”

Row 2 for tomorrow’s Pirtek Enduro Cup opener will be an all-DJR Team Penske affair with the #17 FGX Falcon third and #12 fourth.

“Frenchy (Alexandre Premat) did a fantastic job in that co-driver race and we sort of just able to consolidate there,” said McLaughlin.

“We need to magically find two car lengths down the straight because they’re just pulling away, so we’ve got to check it out.

They were split by Heimgartner in the #7 ACE Nissan Altima, while the top 10 was completed by Tim Slade (#14 Freightliner ZB Commodore), Anton De Pasquale (#99 Erebus ZB Commodore), and Craig Lowndes (#888 Autobarn ZB Commodore).

Lowndes and Shane van Gisbergen were involved in a late-race battle which ended with the latter finishing 11th in the #97 Triple Eight ZB Commodore.

Nick Percat pitted from sixth late in the race and finished 25th in the #8 Brad Jones Racing VF Commodore, on the lead lap.

The Virgin Australia Supercars Championship field is next on-track for a 20-minute warm up tomorrow at 1015 local time/AEST before the Sandown 500 at 1320.

Results: Armor All Race for the Grid 2