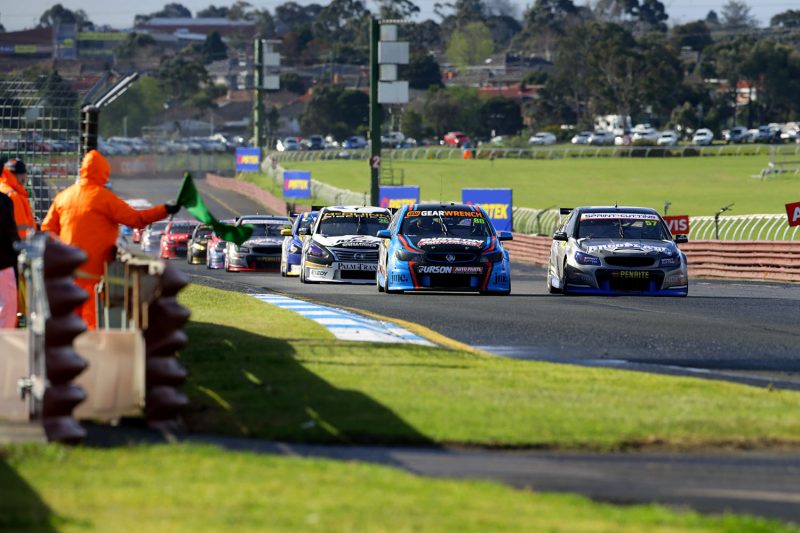 Brodie Kostecki has become a Dunlop Super2 Series race winner in a helter-skelter encounter which had major ramifications for the title race.

Kostecki wasn’t even first to the chequered flag but gained a position due to a time penalty hanging over Garry Jacobson for, ironically, an earlier incident with the eventual race winner.

He held off two-time series winner and current points leader Paul Dumbrell before a third Safety Car intervention and managed the final lap after that restart to notch up not just a first win for himself but also for the Kostecki Brothers Racing team.

Heavy rain in an isolated section of the circuit, primarily around Turn 4, saw the first two laps run under Safety Car and allowed the field to take the start on slicks.

Jacobson passed Armor All Pole-sitter Pither into the first corner of actual racing but it was soon Brodie Kostecki pressuring the #26 MW Motorsport Nissan Altima for first position.

He got alongside despite having to run through the weeds on the chute from Dandenong Road to the final complex, but Jacobson ran wide at Turn 12 and forced the #57 VF Commodore even further away from the race line and onto the grass.

That incident, for which Jacobson would cop the penalty, allowed Pither to reclaim the lead.

Dumbrell passed Jacobson on Lap 4 and Pither on Lap 6, before Pither ran off at Turn 2 on Lap 7 and gave up second position to Brodie Kostecki.

The latter did the same a lap later but survived as Pither was taken out by an out of control Will Brown (#38 Eggleston Motorsport VF Commodore) just behind.

The Safety Car was called but both eventually drove off the wet grass, Pither just staying on the lead lap after it looked like he might be stranded and Brown issued a drive-through.

Brodie Kostecki pounced on Dumbrell upon the restart before a charge from Jacobson.

The 2016 series winner reeled off several fastest laps as Dumbrell let him go, presumably with knowledge of the impending penalty, and then Brodie Kostecki ceded the nominal race lead.

Jacobson’s official lead was over two seconds, and he still reset the lap record that time around anyway, but an effective position of approximately 14th became 20th as the field compressed again.

Lap 20 of 22 became the single-lap sprint to the finish due to time certainty and there was time for more contact when Kurt Kostecki forced his way down the inside of Dean Fiore (#23 MW Motorsport Nissan Altima) at Turn 1.

Fiore made contact with Kurt Kostecki again at Turn 2, then turned him around altogether at Turn 4.

In the end, it was Brodie Kostecki from Dumbrell and Thomas Randle (#5 Tickford Racing FGX Falcon) at the front.

The latter was not exactly removed from the drama as he had a big battle with Alex Rullo (#62 MW Motorsport Nissan Altima) and Macauley Jones (#14 Brad Jones Racing VF Commodore), but they rose to the top five as the rest sprayed off around them or were penalised.

Fiore was in fact fifth across the line but got another 26 seconds shortly after the race to drop to 19th.

The Super2 field will be back on track for Armor All Qualifying for Race 2 tomorrow at 0915 local time/AEST.