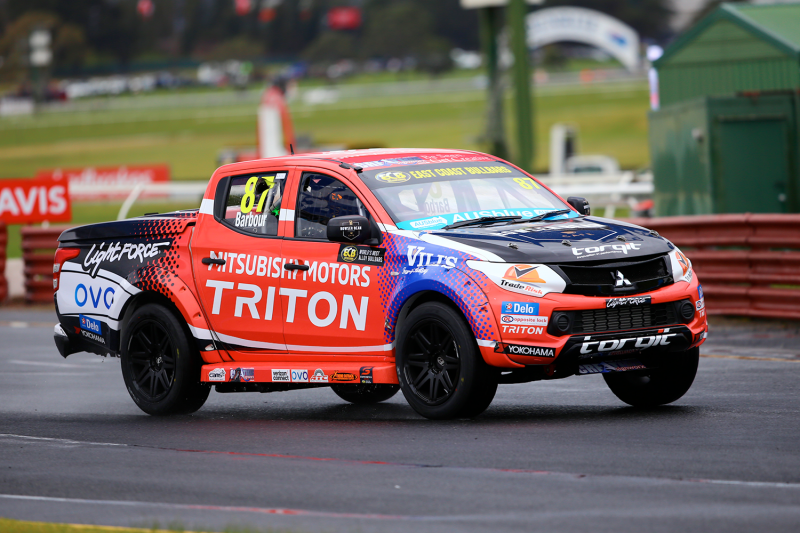 Elliot Barbour has claimed his first ECB SuperUtes race win after a dominant performance at a sodden Sandown.

The Mitsubishi Triton driver led the race throughout to take an unchallenged victory from Ben Walsh, who recorded a personal best in the category with second, with Ryal Harris a distant third.

Barbour held the lead at the start, Walsh and Harris banging doors through the Turn 3/4 complex.

Tom Alexander slipped from second to fifth midway around the opening lap after appearing to miss a gear, with Walsh in second over Harris and Craig Woods.

Harris fell to third as Woods powered by down the back straight on the second lap, the Mazda BT50 driver immediately fighting back as he reclaimed the place around the outside of the final corner.

Woods lost out to Alexander a lap later, only for the battle to continue as Woods undid Alexander’s efforts at the end of the front straight next time around.

Out front, Barbour had extended a more than 1.5-second advantage over Walsh, who in turn was nearly seven seconds clear of third placed Harris after five laps.

That was the way the leading duo ended, with the pair eight seconds clear of Harris at the flag, who himself had opened a two second advantage over Woods.

Aaron Cameron climbed to fifth as Alexander faded in the second half of the race to slip to sixth in the Holden Colorado.